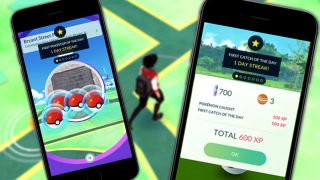 Fresh off its first seasonal event, Pokémon Go is adding a new feature designed to keep players coming back. Every. Single. Day.

Niantic Labs, the team behind the mobile 'mon craze, announced it's adding daily rewards to the game in a forthcoming Pokémon Go update.

Now, the first time players check in to their favorite PokéStops or catch a Pokémon each day, they'll receive a little bonus - culminating in an even bigger reward if they can make it an entire week without breaking their streak.

The timers reset at midnight, but anyone tempted to make Pokémon Go a daily habit needs to start thinking about how to deal with the game's rampant battery consumption.

Turning off data won't help, and you may need a bright screen so you can clearly see the Gastly you're trying to snag, so the best option for the committed trainer is a portable battery pack.

At 3,350mAh, the Jackery Mini has a healthy battery life, but definitely doesn't compare to the likes of many of Jackery's larger bricks, which rock anywhere between 5,000mAh to an outta-sight 20,000mAh.

However, the Mini's tiny size makes its modest-but-still-quite-decent tank of juice worth a look.

At 2.7 ounces and only 3.7-inches long, the Mini won't just stave off a "Low Battery" warning, but also save you having to carry around a chunky aluminum block everywhere you go.

While many of our other favorite juicers go big in the power department, we can spare a few charges to regain space in our back pocket.

The CHOETECH Portable Power Bank tells you its objective by name alone. It doesn't merely hold an electric charge - this thing is a portable bank of energy!

With two ports and a whopping 15,600mAh of power in its reserves, you can go full days without needing to charge a single device. So, yeah, this thing can definitely handle a few trips to your local Gym and back (Team Valor, represent!).

Adding to the fun is the fact that the CHOETECH isn't picky about charging cables, with both microUSB and Apple Lightning inputs.

This means you won't have to buy an extra cable just to go with your portable battery, equating to more loose change to spend on Lures!

The 8,000mAh battery makes the Piston Power Beacon more than a camping flashlight, fully charging a standard phone up to four times while fitting nicely on a belt loop - perfect for freeing up a hand for tossing PokéBalls without worry of running dry on battery.

If you're still on the fence, these three aren't the only chargers that capture the spirit of Pokémon Go - check out our entire rundown for even more potent, portable PokéPower options.

How about a new phone altogether?

Yes, the smartphone you take out with you can actually make a difference.

To that end, we took some of the best handsets available to see which built-in battery wants to be the very best, like no phone ever was.

You can see the results for yourself in the video below: