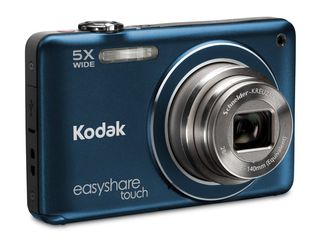 Kodak is concentrating on its printing business, moving away from digital cameras

Kodak, the historic photography brand, is concentrating its efforts on printer sales ahead of a quarter which it expects to be strong.

According to Antonio Perez, CEO of the firm, all four of the company's digital growth businesses are expected to show growth in the fourth quarter.

However, none of those businesses are camera businesses. Kodak has been struggling to keep up in the digital photography world, with thousands of job losses and recently the sale of its image-sensor division, which was the pioneering arm of the company which invented the first digital camera sensor.

Three of the four businesses are concerned with the commercial printing industry, which Perez said will be the "nucleus of the new Kodak."

Stock in Kodak has fallen dramatically in the past year, chiefly motivated by investor worries that Kodak will file for bankruptcy, along with higher than anticipated losses.

As pioneers in the photography industry, Kodak holds several patents which have been raising money for the firm. An upcoming sale is expected to raise billions.

A $3million printing press in Asia is about to go into production which will run exclusively on Kodak inks and print heads and will deal with businesses printing things such as catalogues.

Of the four "digital growth" businesses, just one is consumer focused, and that is the desktop inkjet printer arm of the company. Kodak recently launched a new set of Hero printers, and invests heavily in advertising to boast of its cheap ink costs.

Kodak recently admitted in an exclusive interview with TechRadar that for the majority of customers, using its printers was less cost-effective than other brands.