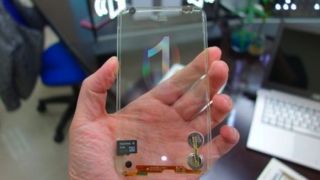 Looks like we may be seeing transparent glass smartphones by the end of the year, if a Taiwanese tech firm gets its way.

Polytron Technologies' General Manager Sam Yu showed off a prototype of a see-through smartphone to PC World recently. The clear handsets aren't ready for the real world just yet, however, as the prototype wasn't functioning at the time of the demo.

But with a year to work out the kinks, Yu was confident that the technology will be available to consumers before the year is up.

The glass will contain nearly invisible electric wires and most of the device would be transparent, the report noted. A few components will still be visible such as the battery, camera parts and memory card, which would all remain behind some form of casing.

Polytron is the company that produces "Polyvision Privacy Glass," a smartglass that can go from a near-opaque cloudy white to mostly clear by running an electric current through it. It's like high-tech privacy blinds.

Polytron sells the glass mostly to construction projects, but it wants to use similar technology to create the future of smartphones.

Making a smartphone out of transparent glass would have some notable upsides. The phone could be thinner and much lighter than traditional metal and plastic smartphones.

But we'd hate to think what would happen if the glass device were dropped.

Though a glass smartphone seems pretty futuristic, we've seen unconventional technology before. Samsung has put out a few demos of its super-flexible, plastic OLED displays since the end of 2011.

The screens are bendable, twistable, nearly indestructible and the company has supposedly ramped up production of the screens at the end of last year. A Samsung exec even showed off a version of the tech at CES 2013 to remind everyone the company is still working on the project.

Yu said he wasn't sure how the glass will affect smartphone price. But he's sure there is a demand for the product, both with handset producers and consumers.

In fact, Polytron is so confidant that it's already making similar products: nearly transparent USB sticks to be sold later this year, and speakers embedded into a pane of thin glass.

Yu said the company is currently working with smartphone manufacturers to get clear handsets out by the end of the year. Though he didn't drop any names.

"All handset makers are looking to work with us," he told PCWorld. "The technology is mature."

So by next year, your phone may be a little more difficult to find.