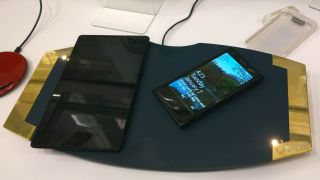 The days of wired chargers are numbered.

On Tuesday two wireless charging standards agreed to join forces and share their technologies so that both can improve.

It's a move that will not only improve the standards of wireless charging technology but will also drive the industry towards a universal standard and in the process likely increase the adoption of it, turning it from a fairly niche technology to something which could one-day outright replace wired charging.

Though in the short term its more likely just to mean that more phones and other devices will support it, while the uptake of wireless charging pads in coffee shops and other public spaces may increase too.

Wireless charging gives you a lot more freedom with your device. Rather than being chained to a cable you can just put your phone or other device on a charging surface. No more searching for your charger or fiddling around plugging it in. Longer term it could also mean wireless charging abilities being built into tables and desks, so simply putting your phone down on them will charge it.

Previously any wireless charging solution would generally only be certified for one of those standards, but now it will be possible for them to incorporate technology from both PMA and A4WP.

PMA has developed the Open Network API, which can turn individual charging spots into a global wireless power network, while A4WP has created the only wireless charging specification which uses magnetic resonance, a technology which enables devices to be charged without being in contact with anything.

So now the two companies will be able to share those technologies and anything else they develop, meaning that they can all potentially be supported by devices, making wireless charging devices more adaptable. It should help usher in the next generation of wireless chargers and bring us one step closer to a wire free future.