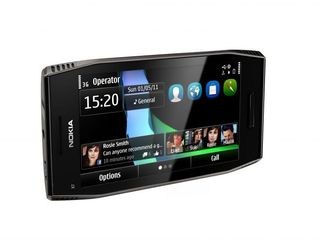 The Nokia X7 drops in on Three

The Nokia X7, the second phone on the UK market with the Symbian Anna update, is finally being offered through a retailer with Three.

The new handset comes with a 4-inch OLED screen, Bluetooth 3.0 and USB-on-the-go to allow connection of hard drives and USB sticks directly to the phone (although you'll need to buy a separate lead for this as none will be provided in the box).

The new Symbian Anna update, which will be coming to other Nokia phones imminently, offers faster web browsing and better keyboard operation - it might not bring the phones up to iPhone levels of user experience, but it's certainly a step in the right direction for new users.

Three is the first retailer to announce the Nokia X7, either on contract (£30 a month) or on pay as you go (£380 outright, but users are forced to sign up to a one month rolling contract, which is pushing the boundaries of paying as you go).

We cranked up the TechRadar Number-0-Matic (patent pending) to see which deal worked out better - it seems if you go down the 'PAYG' route the overall cost will be £20 higher over two years, but you're saving yourself the commitment and you get more data to boot.

And as an additional bonus, Three's chucking in a new service on the homescreen called 3Spot too, which allows connection to laptops or other WiFi devices - essentially making your phone into a wireless hotspot, which we thoroughly approve of, especially if you have all-you-can-eat data enabled.