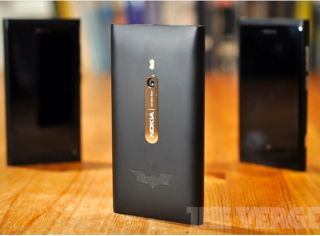 Nokia has been showing off its ultra limited edition run of Lumia 800 Dark Knight Rises handsets.

The devices, which tie-in with next summer's Christopher Nolan-directed blockbuster, boast a matte-black casing, with the Caped Crusader's logo engraved into the back.

The Windows Phone-toting handset remains identical to the original device on the inside, but this superhero-infused edition is undoubtedly the coolest a Nokia phone has ever looked.

However, before you start sending letters up the chimney, only 40 of these devices have been created worldwide, so getting your hands on one is not too likely.

This isn't the first time Nokia has latched onto the Batman movie franchise.

The Batman films always serve up a bounty of cool, yet unlikely, gadgets so we're excited to see what The Dark Knight Rises brings in 2012.