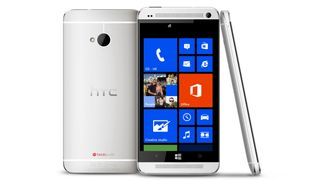 Windows Phone 8 fans: listen up. You could be getting a new toy to play with this year in the form of the HTC One.

Launched earlier this year running Android Jelly Bean, rumours are now suggesting HTC's flagship smartphone - and the best phone in the world today - could get an OS reboot before the year is out.

According to the folks at Neowin, an inside source has revealed that the Taiwanese firm is working on a handset which will look similar to the HTC One, with a screen somewhere in the region of 4- to 5-inches.

The unnamed source stressed that the device in question wouldn't be identical to the One, although you should expect a metal chassis, Beats Audio technology and, obviously, Windows Phone 8.

It's thought that the handset will also borrow the UltraPixel camera technology found in the Android flagship, although specs are far from confirmed.

HTC has already dipped its toe in the Windows Phone 8 water with the HTC 8X and 8S which were launched alongside the platform last year, with the former hand-picked by Microsoft to be its signature WP8 device.

However it's been all quiet since then over at HTC, so it's not a huge surprise to learn that the manufacturer may be planning its next onslaught.

Apparently we could see the Windows Phone 8 smartphone announced this Autumn, with a release date close to Christmas - this is definitely one to watch.