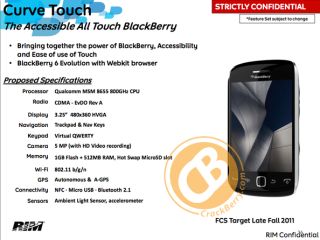 The Malibu aka BlackBerry Curve Touch is an all-touch handset

UPDATE: The BlackBerry Bold Touch has now been offically launched - check out our news piece and full hands on

Phone companies just can't keep their documents from falling into internet-friendly hands, and RIM has been particularly clumsy this year.

After a host of handset leaks earlier in the month, the company's product roadmap has now made its way to BlackBerry blog Crackberry.

Some of the products are old news – the Playbook, for example – and some are merely the CDMA versions of the leaks we've already seen (the Sedona is the Curve Apollo, the Montana is the Dakota and the Storm 3 is the Monaco).

But the handset code-named Malibu is a mysterious new one, clarified in a further slide as the Curve Touch, an "accessible all-touch BlackBerry".

Like most new and current BlackBerrys, the camera offers a 5-megapixel sensor with HD video recording.

Although there's no physical QWERTY, the familiar optical trackpad and navigation keys from the likes of the Bold 9780 are present and correct.

Interestingly, the handset will also feature NFC connectivity, although by the time it's released at the end of the year NFC may be fairly old hat.

The Malibu's OS will be "BlackBerry 6 Evolution" – which means it will focus on the digital compass and augmented reality, NFC, HD video and HTML 5.

This information all comes from RIM's CDMA roadmap, which suggests that the handsets are intended for the USA and Canada; still, there's a good chance we'll see a GSM version of the Malibu meant for the European market. We will keep you posted.