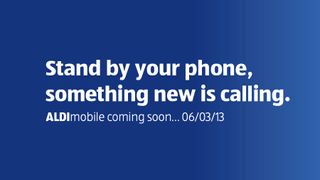 On March 6 we'll find out who has the cheapest SIM

Cut-price supermarket chain Aldi is teasing a new mobile service in its latest catalogue, and though there are plenty of details absent at this stage, we want to know if Aldi can be Australia's cheapest SIM card.

We don't need to wait too long, a countdown clock on aldimobile.com.au is ticking down to March 6.

It comes with all the standard bells and whistles too; Wi-Fi, Bluetooth, GPS, plus 3G hardware with support for the 850 and 2100MHz frequencies; fueling speculation that the Aldi sevice will piggyback on the Telstra network.

The name Aldi is now synonymous with cheap groceries in Australia, a market dominated by the duopoly of Coles and Woolworth's. Aldi customers trade off brand awareness for lower prices, and may continue to with this new mobile offering. if the price is right.

Aldi enters a saturated market, with plenty of low-price rivals already operating. Amaysim, Lebara, Kogan and TPG have high-value, low-cost plans, with low per minute billing rates and big hunks of data associated with most plans.

In Germany, Aldi has been running a mobile service for some time, under the name Aldi Talk. Calls cost 11 cents per minute, or 3 cents if connecting with another Aldi customer. There is also a monthly plan costing 8 Euro a month, which includes 300-minutes talk-time and 300MB data.

Of course, Aldi's relationships with telcos in Australia would have to be negotiated from scratch, so these prices are in no way indicative of what we can expect down under.