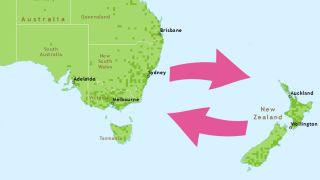 The government could step in to make roaming cheaper for consumers

Travelers to and from Australia and New Zealand may soon see a reduction in the cost of using their phones abroad, with the governments in both countries calling for lower rates.

A new report on Trans-Tasman roaming costs is calling for greater transparency in the way telcos billing one another for roaming services, including an annual report about these cost structures. Failure to comply with one or both of these recommendations could see the governments impose regulations to ensure fair pricing for roaming costs.

In coming to this conclusion, the report's authors noted that roaming costs were between AU$2 and AU$8.50 per minute for calls, 75-cents for an SMS and up to AU$20 per MB for data.

"If [the telcos] don't provide a better deal for New Zealanders and Australians when they go across the Tasman, in the end we'll do something about it',' Key said during a press conference.

The report notes strong criticism by all of the major telcos in Australia and New Zealand, all of which were critical of the way the data for the report was collected and analysed and opposed to the introduction of pricing regulations.

Roaming regulations would be a new thing for Aussie telcos, but its not a global first. The European Union has been enforcing regulated pricing across Europe since 2012, working towards lower call prices year-to-year going forward. The cost of data is monitored, with the maximum cost of a megabyte currently at 70-cents, with a goal of 20-cents by July in 2014.