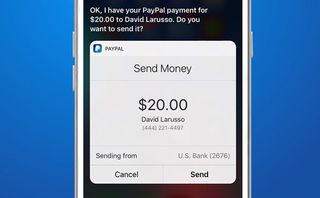 PayPal has released an updated version of its iOS app featuring Siri integration, which will allow users to use the voice assistant to send and request money.

The new feature was announced on PayPal’s official blog, and will be available in multiple languages across 30 countries.

Siri integration is a big part of PayPal’s efforts to make peer-to-peer (P2P) transactions as easy as possible for its customers and grow mobile use.

According to PayPal, sending money between friends and family is one of the main ways people use its service, as people increasingly turn away from cash and look to online banking via smartphones for convenience.

The company says it expects the volume of P2P transactions will only increase over the coming holiday period, predicting more than 17 million P2P transactions in the month of December alone.

In light of this, PayPal is calling Siri integration “an early holiday present” for its users, which it hopes will make their lives easier over the holiday season.

If you have the PayPal app installed on an iPhone or iPad running iOS 10, there are a number of voice command options that will call Siri to action, such as “Hey Siri, send Bill $50 using PayPal” or “Hey Siri, request $30 from Jennifer with PayPal.”

This is a positive move for Apple as well as for PayPal, proving that the company’s decision to open Siri’s programming interface to third-party developers was a good one, which should see Siri become a more useful and natural AI assistant.

You can see the new feature in action below: