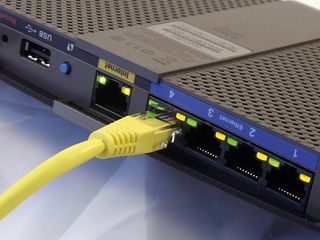 Everyone likes being in control - we don't want to be told that we aren't allowed to do something with our own hardware. In this world of locked-down operating systems, proprietary software and rights-removed content, anything that gives us control over our hardware is a good thing.

One such area is the world of wireless router hacking. You might not have come across it before, but it's a well-established niche that provides fresh, Linux-powered firmware for a wide range of wireless routers, which wouldn't necessarily get updated otherwise.

It's something you should be interested in: it gives you total control over your wireless routers, and it's fun.

Before you dip a toe into these murky waters, you should be aware of the potential dangers. Router hacking isn't without its risks - if you try to flash a router with the wrong firmware, you'll brick it and end up with something that's about as useful as a concrete kite. Because of this, we strongly recommend that you don't try it if you only have one router to hand.

However, if you have a suitable old one lying around, you'll be able to revitalise it with a raft of new features that might even push your current router into the background.

The idea here is simple: you circumvent the firmware upgrade process of an existing router to inject and run your own feature-packed software.

Over the years, certain manufacturers have made this job easier by making their router firmware and chipset software open source, thereby making it easier to implement third-party versions. This has led to the creation of a number of router-hacking projects. We'll be looking at the benefits of some of the most common ones, because they tend to cater for different segments of the market.

In the world of router hacking, the main branches of firmware code are OpenWRT and DD-WRT.

For our walkthrough, we're going to concentrate on DD-WRT, which tends to be more end-user orientated. Its main aim is to provide a working firmware that you can actually install.

OpenWRT takes a slightly more high-brow approach, wanting to provide framework and source code support for embedded devices that also happen to be gateways and wireless routers. Having said that, many devices have ready-compiled OpenWRT firmware, with comprehensive installation guides provided.

Going back to DD-WRT, the first and most important step is to identify your router's make and model. Make sure you've got the exact one - there may be several with similar model numbers and designs. Doing this will provide you with the correct firmware and tell you exactly how it should be installed.

It's important that you follow the installation instructions to the letter - if you're told to do a power cycle or reset, do it. These instructions are linked to clearing the NVRAM that stores tables and other settings. If these aren't cleared, they can play havoc with the new firmware, and cause you headaches trying to work out the source of the problem.

Oddly, it can be quicker to come from the other direction and check if you have an incompatible router. There's a list of known incompatible devices here.

There are some quick rules that can quickly eliminate certain models from your search. For the UK, it's important to note that routers with a built-in ADSL modem won't work for DD-WRT. Don't despair, though - owners of ADSL routers can try www.routertech.org, which supports various models that use the Texas Instrument AR7WRD platform. There's a list of compatible devices here. It isn't exhaustive, but it's worth a look.