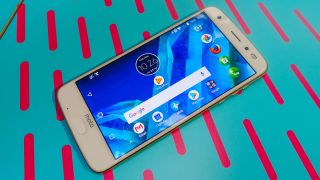 Google’s CEO confirmed recently that we’ll be getting 11 Daydream-ready smartphones by the end of 2017, and that left us with some mystery handsets that could be used in the Daydream View headset.

We think we’ve worked out most of them, but some digging has yielded a nugget of good news for the Motorola fans:

"The Moto Z2 Force surpasses all of the requirements to pass Daydream certification,” a spokesperson told TechRadar.

“We have tested it ourselves for compatibility, and now that the product is officially announced we will be working with Google on the formal certification."

Another spokesperson shared that "the code for the Snapdragon 835 chipset won't be ready until later this summer."

One can only (day) dream

The Moto Z2 Force should be a shoo-in for being Daydream capable, as not only does it have the powerful Snapdragon 835 CPU, it also has the high-res OLED screen, which has the lower latency Google is stipulating is needed to get the smooth virtual reality experience on its headset.

Not only that, 2016’s Moto Z Force is Daydream capable already, so it would have been weird if the sequel wasn’t going to be certified too.

But now we know that the Z2 Force is going to be part of the Daydream family, it seems that some momentum is building for the virtual reality platform.