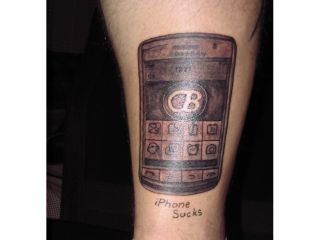 Some ideas are just too good, aren't they?

A fan of RIM's latest handset, the BlackBerry Storm, loves the handset so much that he got a tattoo of the handset on his arm.

CrackBerry recently launched a competition to win a free BlackBerry Storm, inviting fans to tell the site how far they would go to get their hands on the latest iPhone beater.

T.J. from Toledo in the US decided that he was the most fanatical, telling the CB boys that he would not only get a tattoo, he would have the website's logo and the phrase 'iPhone sucks' inked on too.

The latter part was pretty dangerous, as the tattooist was an Apple fan with three Macs in the shop... but hey, what price a free handset, eh?

And that's not all... not only was T.J. one of many to promise to get a tattoo of the handset, he's the first of 10 winners to show how much they love the BlackBerry.

Expect shark-wrestling and a video of 'happy slapping' Steve Jobs to be appearing soon...