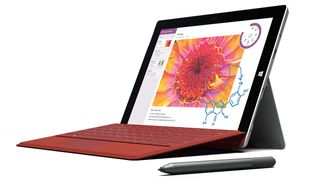 Microsoft has today announced the next addition to its tablets line up, the Surface 3, which wants to replace your laptop.

Microsoft's new tablet will be the thinnest and lightest Surface product yet with a new quad-core Intel Atom x7 processor and 10.8-inch ClearType HD display with 3:2 aspect ratio and 1,920 x 1,280 pixel resolution.

There will be two versions of the tablet, one packing 4G LTE technology and one without, but both will come with Windows 8.1 on board with all the dedicated Microsoft apps. Both will be ready to upgrade to Windows 10 for free when it's available.

Each comes packed with Bluetooth 4.0 technology and has an 8MP rear facing camera with auto-focus and 3.5MP 1080p front facing camera.

You can pre-order the Surface 3 today from Microsoft's website and it'll be available through a variety of other retailers from May 7.

Pricing for the 4G LTE version in the UK hasn't been cleared up just yet, but Microsoft says it will confirm this soon. Meanwhile, this iteration will start at $599 or AU$839 for the entry level model. (For the 4GB version with LTE, you'll have to pay $699 or AU$979.)

Microsoft's Surface range has been struggling to make a dent in the market for the last few years, but the little changes and turning it into a quality tablet option that may be able to pick up a few users who want something a little different and more productive than an iPad.