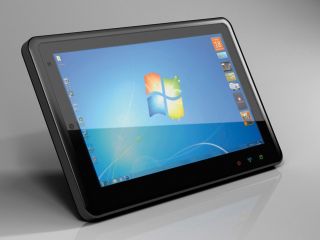 AHX Global's iTablet has been a long time coming

Back in February 2010, UK company X2 beat Apple to it and launched a product called the iTablet.

Now, almost a year later and with the iPad a household name, the Windows-based tablet is being released at CES as the iTablet W10, under the AHX Global brand.

The specs have improved a little since we last reported on the iTablet; instead of Windows Mobile 7 (as the world knew it then), the slate will ship with Windows 7 Home Premium and a trial version of Microsoft Office 2010.

Gotta get yourself connected

When it comes to connectivity, there's no SIM-integrated model, so you're limited to Wi-Fi and Bluetooth. There are two USB 2.0 ports, so you could also use a dongle or Mi-Fi to stay connected on the go.

A two-megapixel webcam also allows for a spot of video calling, something the iPad is not yet capable of.

Powering all this is an Intel Atom Z530 1.6GHz processor with 2GB of RAM, so we'd expect multitasking as standard.

As well as the high-spec iTablet, AHX Global is also launching a slightly lower-spec version called the W10² with a 1.3GHz processor and 1GB of RAM, which comes Windows 7 Starter Edition but no webcam or HDMI output.

There's not much longer to wait until you can get your mitts on an iTablet, because they'll be shipping in March.