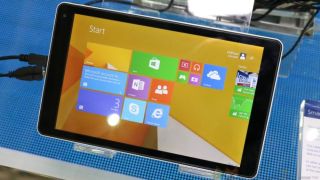 Earlier this year Microsoft began offering manufacturers of tablets smaller than nine inches a subsidized version of Windows 8, called Windows 8.1 with Bing, to get more devices onto the market.

We're now seeing the first few trickle out (Toshiba's 8-inch Encore 2 is among them), but China-based Emdoor's EM-i8080 slate could be the cheapest yet.

Coming in a very wallet-friendly $100 (£60, or AUS$180), its specs can't quite match what you'd find in most other similarly-sized 8-inch Windows tablets, but they should allow for a basic computing experience.

(Not quite) blazing a trail

Spotted by MobileGeeks at Computex, the device features an 8-inch display (1280 x 800) powered by a 1.33GHz Intel Atom Z3735G Bay Trail Processor backed up by 1GB of RAM.

There's a 16GB SSD onboard, which won't leave a huge amount of space on the device for apps and documents, but a microSD slot allows for it to be extended.

Connectivity options include micro-USB and mini-HDMI for hooking it up to a larger display.