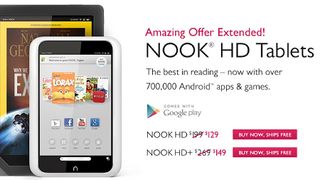 More Nook HD on the way

With its former CEO now out of the picture, Barnes & Noble executives attempt to use Jedi mind tricks to make us forget the company's recent decisions involving Nook hardware.

CNET reported that Barnes & Noble's Nook Media division will continue developing both black-and-white as well as color tablets in a reversal of the company's plans to abandon manufacturing hardware itself.

The executive added that at least one new Nook tablet would be inbound for the holidays, with others on the drawing boards for future release.

Lynch then shuffled out the door in early July, leaving the Nook Media unit without a single leader as Huseby shifted from Chief Financial Officer to CEO of the bookseller's entire Retail Group.

"Our top priority in our operating strategy is to increase all categories of our content revenue. We are working on innovative ways to sell content to our existing customers and are exploring new markets we can serve successfully," Huseby elaborated today.

Despite a change of heart, the Nook Media unit watched sales dip 20 percent in the most recent quarter, despite narrowing financial losses to $55 million (about £35.1m, AU$60.9m).