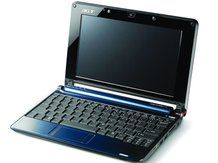 The Inspire One... Acer's secret weapon

The netbook market is one of the few really strong electronics markets left in these credit-crunched times, and Acer is planning to be the big wig in the segment throughout 2009.

Having just announced its Q3 financial results, the PC manufacturer is feeling pretty smug after announcing an after-tax profit of over £100m.

Acer has sold over two million netbooks worldwide in the last three months, with the Aspire One the best seller among the range, and demand for it is growing.

This has prompted the manufacturer to predict it will sell 50 per cent of all netbooks next year, which would mean shifting around 15 million units.

Acer President, JT Wang, is also predicting that the company's netbook shipments were likely to grow by up to 35 per cent to meet the demand, with 2008's sales set to benefit by the company selling more than the 30 million PCs previously estimated.