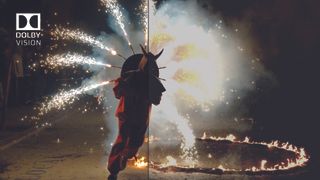 It’s hard to go one day as a home entertainment lover and not hear about the ‘next big standard’ in television.

Apologies for tossing one more acronym on your plate, but trust me, it’s an important one.

Perceptual Quantizer (PQ) was actually the first technology that set out to make broadcast HDR possible – in fact, Netflix and Amazon streams in HDR10 and Dolby Vision already use PQ. HLG came along a little later but attracted more attention because of the research committed to it by the BBC and NHK. And while HLG promises better backwards compatibility with older sets, PQ is set to offer brighter, better broadcasts.

At least, that’s what Dolby expects.

To that end, Dolby’s VP of Consumer Imaging Roland Vlaicu says that broadcast Dolby Vision isn’t a matter of if, but a question of when.

“We have developed a workflow that gets PQ from the camera directly to the consumer,” Vlaicu told us. “All we send is a 10-bit PQ signal that fits into the space of standard dynamic range video.”

This PQ signal can then be picked up by a cable box and interpreted as Dolby Vision data, effectively giving you broadcast Dolby Vision.

It’s a great plan, and one many AV enthusiasts would love to see come to fruition. Sadly, Vlaicu and the crew at Dolby have one major hurdle in the way: old ATSC video standards that so far only include 720p and 1080p video in standard dynamic range. In order to get either HLG or PQ broadcasts in America, that’s going to need to change. Big time.

The times they are a’changing

Here’s some good news: Shortly after Vlaicu and I spoke, the ATSC approved a ballot containing the next generation of broadcast HDR standards. Among them, you’ll find both PQ and HLG. The former is supported by names like Qualcomm, Sharp, Samsung, Dolby and Technicolor, while the latter is being backed by NHK and the BBC.

So what would this new high dynamic range future look like? It’s complicated, but it’s slowly coming together piece-by-piece. One part of the equation is how the data is encoded at the source – PQ, HLG or both. If it’s both, different broadcasters can take different versions of the same event – say a World Cup match – and send it to different regions.

“If one country wants a PQ version of the stream and another wants an HLG version, that can happen,” Vlaicu said. But starting from HLG and going to PQ isn’t the best – converting an HLG signal to a PQ signal means the end product won’t be as data-rich as it would’ve been in native PQ. That’s why Dolby wants the world to take a closer look at Partial Quantizer as a format.

Vlaicu and his team stand behind a PQ-first strategy, though they understand the entire world may not be ready for the standard’s unearthly 10,000-nit peak brightness level. Interestingly, however, Vlaicu says that down-converting from PQ to HLG is the opposite, it’s much, much better in terms of picture quality – though that’s a fact he believes got lost in translation somewhere.

“That’s a misconception about PQ,” Vlaicu tells us. “It’s easy to derive an HLG signal from PQ, but not the other way around [without a loss in quality]. The HLG-first approach is going to disappear eventually.”

And when it does, Dolby wants the world to be ready for it.