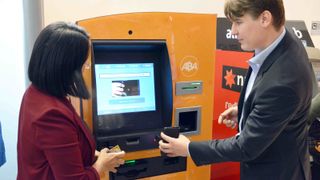 Will you cash in in Bitcoins?

Although the digital currency is facing some troubles, ABA Technology has today opened Australia's first Bitcoin ATM in Sydney.

Located in Westfields shopping centre on Pitt Street Mall in Sydney CBD, the Bitcoin ATM, which looks like any other ATMe ATM, will allow users to buy and sell the crypto-currency, or exchange it for cash.

Of course, you'll need to have a current Bitcoin wallet in order to use the ATM, and all first time users will need to register on the ATM as well to be able to use the machine.

The Bitcoin ATM launch in Sydney comes amid news that the National Australia Bank (NAB) will be closing the accounts of businesses who primarily trade in crypto-currencies, including Bitcoin, in early May.

Earlier this year, the biggest Bitcoin exchange in the world MtGox filed for bankruptcy.

However, despite all of this, the company behind the launch of the ATM today, ABA Technology (or Australian Bitcoin ATMs), has plans to launch hundreds of Bitcoin ATMs across Australia over the coming years, with a Melbourne ATM set to open in a few weeks time.

"Our goal is to provide consumers with the advantages of the Bitcoin digital currency world, and enable the mass market to buy and sell Bitcoin in a safe and secure environment," said ABA Technology CEO Chris Guzowski.

"We have completed a further capital raising from new and existing investors that will help accelerate the expansion plans."