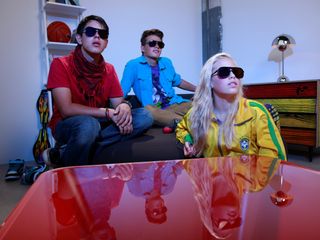 Everybody knows that given the choice between tech that's pristine and pure and tech that likes to get down and dirty, down and dirty always wins. Skin flicks help tech triumph, and formats without them flop. But is that actually true?

It wasn't just the delivery mechanism, though - it was the quality. Pornography has the same "good enough" problem that music has: beyond a certain point, any improvements are incremental. That's why Super Audio CD bombed: most people were perfectly happy with low-bitrate MP3s on rubbish headphones or cheap stereos.

With pornography, once the quality's good enough that you can differentiate between People Totally Doing It and a documentary about pigs, a few extra pixels don't make a lot of difference.

Whether it's a 3D PC or a 3D TV, adding an extra dimension isn't cheap: you're looking at a brand new TV or monitor and a 3D-capable player or video card. That's a big investment for what we suspect isn't going to be an awfully long viewing experience.