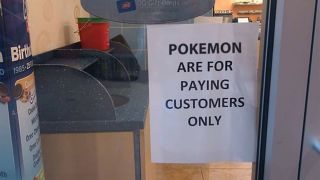 Pokémon Go hasn't even been out for a week - and still hasn't hit the the UK - but the reception has already been quite remarkable.

Niantic says it has paused the global rollout so the servers can catch up to the demand, but there are a couple of workarounds if your country is still on the waiting list.

In the last few days, players have been sharing anecdotes, pictures and videos from the game - many of which have left us impressed, in fits of laughter, or slightly mortified. If you're still waiting for the game, here are some of our favorite stories to tide you over.

The guy whose house became a gym

Spare a thought for Boon Sheridan, who is probably being swarmed by Pokémon trainers as you read this.

As he explained on Twitter, living in an old church means his house has become a Pokémon gym, and the result has been swarms of trainers hanging around his home.

Sheridan has been sharing pictures of players outside his window, although he missed out on getting a snap of the trainer who was wearing an actual Pokémon belt.

Fair play to Sheridan, he's taking it in good spirits. He even had a brilliant idea to change the lights in front of the church to whichever team is the current gym champion.

The duo who kayaked to take a Pokémon gym

10 points for dedication on this one. A couple of Go players in Wellington, New Zealand actually kayaked out to the ocean to capture one particularly hard-to-reach gym.

The gym, located on a fountain, was a half-hour paddle out from Wellington harbor, but that didn't phase Kelsey Thomson and Lizzy Eden, as Mashable Australia reports, with both players making the journey and successfully taking the gym for their own.

However, in an interesting twist it turned out the guy who hired them the kayak was a Go player himself, but was on team yellow (they were blue) and joked that he shouldn't let them use the boat.

Despite their valiant efforts the gym was taken back by team yellow not long after.

All these people in Central Park

Just look at all these people coming together in the name of Pokémon. Isn't it beautiful?

Or how about this lot on their way to catch Squirtle, chanting its name like they're in some strange Poké-cult. Isn't this how Team Rocket started?

The Rattata that appeared on someone's tanning bed

Hey, if you want to be the very best, you've got to always be ready for a Pokémon spot. For Johnny Gargano, that was while he was getting some rays in the tanning salon.

Those teeth probably look a lot more intimidating when you're naked.

The police who are already sick of this

It's not just churches that are showing up as Pokéstops on Go right now - some police stations are also serving as spots to pick up more of those vital Pokéballs and other items.

One Northern Territory Police, Fire and Emergency services wrote on Facebook: "For those budding Pokemon Trainers out there using Pokemon Go - whilst the Darwin Police Station may feature as a Pokestop, please be advised that you don't actually have to step inside in order to gain the pokeballs."

Again, always be prepared. Even if you're witnessing the miracle of your child being brought into the world, that Pidgey ain't gonna catch itself.

Jonathan Theriot shared a picture of the Pidget next to his wife, who later gave birth to their daughter.

The person who found a body while playing

This is where things get a little darker. A teen in Wyoming found a dead body in a river while out playing Pokémon Go.

"I was trying to get a Pokemon from a natural water resource," Shayla Wiggins, 19, told KTVQ. The person found had been dead for less than 24 hours according to detectives.

The robbers luring in their victims using Pokémon Go

In the best example of misusing the game yet, police in O'Fallon, Missouri have reported four people suspected of armed robberies involving Pokémon Go.

The suspects reportedly placed beacons to lure people to their locations where they robbed them.

According to the report, 11 teenagers have been mugged this way so far. Be careful out there.

This amazing story that we really hope is real

This story came from SlothOfDoom on Reddit. You can read it here, but we've also copied it below.

"Ok, reportingb [sic] in. Couldn't sleep so I downloaded the game and took a 3am walk. There is a little park a few blocks from me that had like three pokestops and a gym, so I wandered over there to see what the game could offer. Picked up an Evee outside my house and a couple of trash pokes on the way to the park.

So I get there and wander around a little checking out the stops and rustling around in the tall grass, then decide to go a few blocks away to see a couple more stops when I hear from the darkness a "Yo, my man!"

Turning I see two sketchy looking dudes sitting on a bench in the dark. I must have walked right past them without noticing them Great [sic]. One of them waves "My man, check over by the blue truck over there we got an onyx earlier."

So I wander over by the truck and sure enough there's a fucking onyx there. Awesome. So I end up chatting with the guys for a bit, told em where I got my evee, they convinced me to join red team when I hit level five so we could "lock shit down" in the neighbourhood.

Then the cop shows up.

Yeah, so it turns out two twentysomething black dudes and a forty year old white guy chilling in the park at 3am looks strange. It took a bit of talking to convince the cop we weren't doing a drug deal, and a bit longer to explain the game. Then the cop downloaded the fucking game on his phone and asked us how to get started.

Shops that are done with your Pokémon Go antics

The problem with Pokémon Go is that monsters don't just appear outside. For example, players in Albergen have been entering a cafe to bag themselves some critters, and the owners have clearly had enough, hanging up a sign asking people to not come in and catch Pokémon.

This one has taken ownership of the Pokémon inside its doors, and will only let you catch them if you're a paying customer. Pah.