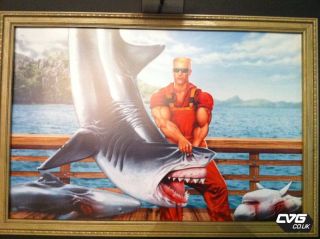 The first Duke Nukem video game in 13-years has stormed straight to the top of the UK gaming charts, despite critics labeling it a massive flop.

Duke Nukem Forever was finally released last Friday for Xbox 360, PlayStation 3 and Windows PCs after over a decade of false starts and delays.

The game, which is a throwback to the popular, trash-talking, ass-kicking, first-person shooters of the 90s replaced Rockstar's gangster thriller La Noire a top of the gaming tree.

The commercial success comes despite a string of critical kickings for Duke's overdue adventure. IGN awarded the game just 5.5/10 while Eurogamer posted a score of 3/10.

The Guardian's Neil Davy awarded the game two-out-of-five and commented: "If this was 15 years in the making, it makes you wonder what they did for the other 14 years and 10 months." Zing!

Meanwhile, on DNF's rapid ascent to the top of the charts, Games Asylum added: "Publishers – if you want your game to go straight to #1 no matter how rubbish it is, just delay it for 13 years and release it without letting anybody review it first. Case point: Duke Nukem Forever."

So regardless of its quality it seems that absence has definitely made the heart grow fonder for Duke fans.