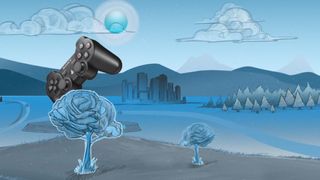 The DualShock 4 just wandering through the barren, PS4-less landscape, there

When Sony said that the PS4 release date would be 2013, it wasn't lying - it just didn't say exactly where it would launch in 2013.

And it seems that's because it doesn't actually know, but reckons that "at least" one country will be able to spend Christmas glued to its games.

The company's European gaming MD Fergal Gara told Digital Spy that although the console will technically launch this year, "exactly what regions, what timing is being worked through. Which regions in 2013 - is it all of them, is it some of them? Is there some degree of phasing?"

Well we don't know, Fergal, you tell us. But he can't, because not even Sony knows yet. Although he did go on to answer that "at least" one region will get the PS4 this year.

But "exact dates, exact regions - is it all or some of them? - We don't know." It's okay, Gara. We'll just add it to the list of things nobody knows about the PS4 yet, like what it looks like and how much of it will work at launch.

We imagine that the USA and Japan will be first in line to get the PS4, likely in time for the festive buying frenzy in December. If that's the case, Europe, Australia and the rest of the world will probably have to look jealously on until early 2014.

Still, how about that DualShock 4 controller, eh?