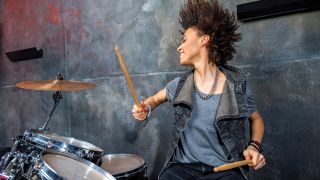 Finding a drummer to join your garage band can be a real chore, but happily for budding musicians everywhere there's a new, and rather clever, beat-maker in town – and you won't have to pay them any royalties...

Sony has created an artificial intelligence system that's capable of creating kick-drum tracking, based on the other instruments used in a song.

Researchers trained the AI system by 'feeding' it data from 665 different songs, covering a wide variety of musical genres.

The result? Automatically generated drum patterns which Sony says sound "musically plausible" in the context of the existing song.

A long way to go

Now, if you're a musician, the last thing you'd like to hear your music described as is "musically plausible" – and the beats created by the AI drummer – which can be heard on the Sony Computer Science laboratory website – lack the flair and spontaneity provided by a human drummer who's spent years perfecting their craft.

That's not to say there are no applications for this technology though; AI beat-making software could be an invaluable resource to anyone who uses a DAW (Digital Audio Workstation) like Logic Pro X or Ableton, and finds it difficult to program their own beats.

Drummers are also notoriously difficult to find if you're in a band – and if this technology could be made to work in real time, bands could potentially replace their human drummer with an artificially intelligent one.

That in turn, could lead to a whole new genre: AI-assisted music. It's already a growing field, with AI composers like Flow Machine creating music in the style of The Beatles with Daddy's Car.

There's even technology out there that can turn your beatboxing into a drum kit using artificial intelligence.

For the time being, the technology has a long way to go before it will be able to replace live musicians – but it certainly seems as though AI music is fast gaining traction.