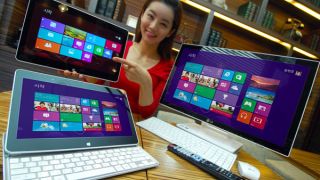 LG gets in on the slidey hybrid action

With the Windows 8 launch just around the corner, LG is the latest to unveil its new-OS running wares with an all-in-one PC and tablet-notebook hybrid.

The company hasn't been all that forthcoming with details on the LG H160 hybrid, we do know that it's an 11.6-inch screened device, with an LG-made IPS panel.

In terms of thickness, it comes in at 15.9mm and LG's clocking battery life at around 10 hours, and we're looking at Wi-Fi, HDMI-out, USB and a microSD card slot when it comes to connections.

Everyone who's anyone in tech has announced a tablet-notebook hybrid this year, with the touch-friendly tablet version of the OS, Windows RT, urging them along - it's not clear if the LG H160 is running Windows RT or Windows 8 though.

Moving on the all-in-one, LG's V325 has a touch-screen, third-gen Core i5 processor and an Nvidia GeForce GT640M for graphics.

No international release date for either computer yet, but they'll be hitting Korea on Windows 8 launch day, October 26.