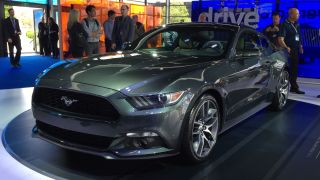 Those looking to pick up a Ford Mustang when it roars on to Australian roads later this year may be pleasantly surprised by the price.

A recent drop in the Australian dollar combined with the notorious 'Australia tax' had many muscle car enthusiasts bracing for a price in excess of $60,000. But Ford has revealed that Mustang prices will start at a more affordable $44,990 (plus on-road costs).

The opening price point is for the four-cylinder Mustang Coupe with manual transmission, and the pricing naturally goes up from there, peaking at $63,990 (plus on-road costs) for the GT Convertible model.

Ford opened pre-orders for the cars back in December, and claims to have received 1,200 orders and 15,000 expressions of interest requesting more information.

The Australian models are still considerably more expensive than their US counterparts, where a pony-badged set of wheels starts at US$23,800. Despite this, Ford's announcement makes Mustang ownership more affordable for Australians than expected.

While previous models have only been brought into the country following a third party conversion to right-hand drive, the 2015 Ford Mustang is the first model to roll out of the factory in Australia-friendly configuration.

The official launch of the Ford Mustang in Australia has been so long awaited, you could say the Mustang is the Netflix of Australian motoring.