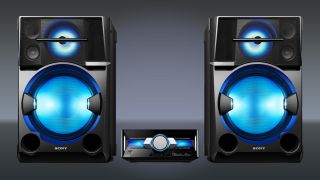 Is this really an invincible speaker?

Muteki means "invincible" in Japanese, and Sony is going to need you to renovate your house to become "Muteki" if you want to use some of its new speakers in your home.

Building on the 7.2 surround system launched back in 2009, Sony has expanded its Muteki lineup to include some new Micro and Mini systems, as well as larger floor standing speakers that will almost certainly warrant complaints from your neighbours.

The smallest Muteki system on offer is the new GTK-N1BT, a 100 Watt system that measures in at about 55cm wide.

It's essentially a high-powered Bluetooth speaker, with integrated NFC for easy pairing with compatible smartphones. Like the rest of the Muteki lineup, Sony has integrates multi-coloured LED lighting for ambient effects while blasting out your tunes.

Sony has kep the asking price for this unit at $279, which is actually all kinds of decent for the amount of sound that comes out of it.

Stepping up from the Micro speaker is the slightly larger Mini speaker, the GTK-X1BT. This introduces more sound - 500 Watts of it, to be precise - and introduces the ability to use the volume dial for DJ effects while listening to music.

There's also an app for iOS and Android from Sony called SongPal, which also offers the DJ effect control, as well as the ability to control playback and the lighting effects on the Muteki systems.

The X1BT will sell for $429, and can be used either flat or in an upright position

Bringing the house down

The big guns of Sony's new Muteki lineup are slightly larger. While Sony is still selling its impressive 7.2 system, the Shake 77 and Shake 99 systems are massive, reminiscent of Doc's speaker in the original Back to the Future.

The Shake 99, in particular, has each speaker weighing 50kg, so these systems aren't exactly portable.

With 3600 Watts of power, the Shake 77 includes extended audio support with an integrated CD player (remember those?) and a couple of USB inputs, as well as Bluetooth stereo and NFC.

The Shake 99 boosts the power output to a slightly impressive 4800W, and got so loud in the demo area Sony showed us that plaster dust was shaken from the floating ceiling, covering the room in a faint white powder.

You can grab the Shake 77 for $1,299 and the Shake 99 for $2,299. What's more, you can buy multiple units and daisy chain them together in an infinite loop using analogue cables, to boost the output to ridiculous levels of awesome.

And because Sony has never been a company to hold back when it comes to a new product lineup, there will also be two new floor-standing speakers launching later this year.

The MHCV3 will combine the lighting, DJ effects and impressive sound output of the other Muteki speakers into a single 720W floor-standing unit come July, while the MHCV5 will do the same thing in September, except bigger at 1440W.