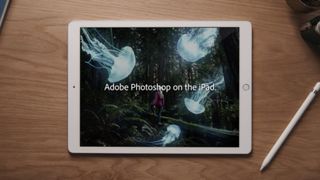 Adobe has just swung open the doors to its annual Adobe MAX conference in Los Angeles, and the event’s most significant announcement for photographers is confirmation that Photoshop is finally coming to the iPad.

Rumors that Adobe has been working on a full version of the program for iPad have been circulating for the best part of the year, although the company remained silent. Now it has confirmed that iPad users will be able to start using the program from next year.

Adobe already provides tablet and mobile users with a number of photo-oriented editing apps, namely Adobe Photoshop Express, Photoshop Lightroom CC and Photoshop Mix. None of these, however, can match the functionality provided by the desktop-based Photoshop CC, with Adobe crediting its arrival on iPad to the “beefier power of devices”.

Photoshop CC for iPad supports the same PSD files as its desktop companion, together with layers, masks and other editing tools. As we might expect, however, the app has been designed to better support the touch functionality of the iPad's display.

As the new app is part of Creative Cloud, users should be able to continue editing between devices seamlessly. This itself is part of a wider announcement, namely that PSD files will be supported by a greater range of apps in the CC ecosystem than before.

The company has also confirmed that all current CC apps will be subject to their own updates. These include Lightroom CC, which will now have the option to import images directly form Apple Photos, as well as Adobe Bridge CC, which gets an updated UI among other things. The desktop version of Photoshop CC, meanwhile, now has an expanded Content Aware Fill workspace (below) among other revisions.

Although Photoshop CC is only being made available to iPad users in the short term, Adobe says it will come to further platforms and form factors when they're ready – we can’t wait to see how a complete version of Photoshop will look and perform on an iPhone. Adobe hasn't confirmed pricing for the iPad version of the program.

Project Rush, which was announced earlier this year, will also see a CC release, under the moniker Premiere Rush CC. Described by Adobe as an all-in-one cross-device video capture, publishing and editing app, it features customizable motion graphics templates, and benefits from Adobe Sensei-powered sound and voice normalization. It’s intelligent enough to automatically lower and raise the volume of music when speech is detected, and fully integrates with Premiere Pro for further editing.

Premiere Rush CC is set to be available in phone, tablet and desktop flavors, with Dropbox integration designed into it and the option to output creations to YouTube, Facebook, Instagram and Behance.

Adobe is using this year’s Adobe MAX conference to launch a series of updates that capitalize on a number of themes, such as the greater role of AI, machine learning and voice recognition for creatives, as well as the increasing importance of touch devices in creativity.

Adobe Max is expected to attract 14,000 creators from over 60 countries. Director Ron Howard, photographer Albert Watson and The Roots drummer Questlove are all due to speak at the event, which is running until Wednesday.