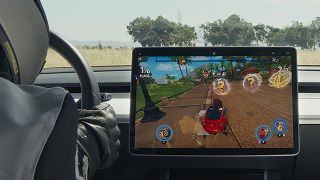 Tesla’s electric vehicles may be the future of the automotive industry, but Elon Musk's cars also have a neat trick up their sleeves - the ability to become a full-on gaming system: Yes, the Tesla Model 3, Model S, and Model X can all play a handful of classic Atari video games as well as a newer one called Beach Buggy Racing 2.

Now, admittedly, gaming inside a car isn’t very common which leads to a lot of questions like 'how do you access games on a Tesla?' or 'are games on Tesla Arcade free?', both of which are great questions.

Are you curious how to start playing these games, how much they cost, and if you can play video games while driving? We’ve got the answers you’re looking for with all things Tesla gaming.

As of August 2019, and car software version 2019.28.1, there are eight games available. The majority of available games include classic Atari games, originally released in the ‘70’s and ‘80’s.

In case you’re scratching your head, yes, Pole Position was included at one point, but has been removed. The most recently added games include Chess and Beach Buggy Racing 2. BBR is the most modern game released and is also available on iOS and other platforms.

Tesla, or more specifically Elon, has announced it would be including more modern video games for its cars - including Cuphead and Fallout Shelter.

When your car can do zero-to-sixty faster than you can make your next move, we call that a checkmate.Chess begins rolling out to the Tesla Arcade globally today 🤠♟ pic.twitter.com/cNRf3kAtAAJuly 26, 2019

If you don't want to pay for games, don’t sweat it, all games so far have been free downloads, included in the car’s software. In fact, even if you don’t want to play the video games they are available across all models in the Arcade section.

To that end, there’s nothing you have to do to download Tesla video games. There have long been rumblings about an app store for Tesla cars, but so far that has not happened and all software is downloaded automatically.

How does Tesla Arcade work?

All Tesla cars include touchscreen displays which is how you play these video games on the center console. Each game puts up virtual controls on the screen to play it.

The driving game Beach Buggy takes the controls a step further and allow one player to use the steering wheel to play the game. Yes, the car tires move when you turn the wheel as well.

To that end, a big concern when people hear video games are available is around safety. Currently video games can not be played, by the driver or passenger while the car is moving. The car needs to be in park for the game section to be available.

While the car is in drive, the games are greyed out and can not be accessed. This may change at some point in the future is full self driving becomes more of a reality, but so far these games are just for killing time in a parking lot or while the car charges.

Can I use a controller instead?

Yes! For those that want to take it a step further, some game controllers are supported including fully supports wired, USB Xbox One and PlayStation 4 controllers. The wired USB mention is key. Bluetooth game controllers are not yet supported directly by the car. If you do want wireless you may be able to use a Windows computer adapter to solve this problem, but it isn’t guaranteed.

Unfortunately there are conflicting reports on Tesla’s forums that Xbox 360 controllers do and don’t work so your mileage may vary, and people have tried using a USB joystick controller which works great with the Atari games.

There are also comments on Reddit about various brands of controllers people have bought off Amazon and whether they do or don’t work.

How do I get started?

You can get to the video games in the car in one of two ways. The first way is through the “easter egg” menu. Tap on the Tesla logo at the top of the center console screen.

This will provide a menu with lots of “hidden” tricks for the car. Tap on the games to see all currently available for you to play.

The more recent addition is along the main menu of the screen. On a Model 3, for example, the up arrow next to the music icon will open a menu of apps. Arcade will listed on the far right. Tap on it to explore all available games.