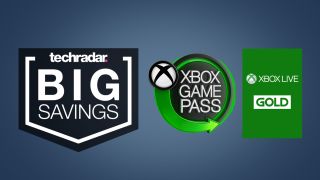 Game Pass Ultimate works to combine the online Live Gold service with the wildly popular game subscription library, Game Pass. You're getting access to exclusive discounts, a massive library of amazing free games (to which Microsoft will now be adding their first-party titles on day one), and the ability to play online with one easy to manage subscription.

If you've never used Game Pass Ultimate before, however, there's an easy way to save even more cash and pick up more months in the process. Keep reading below to find out more:

If you've never used Ultimate before, stop what you're doing. You can get an even better Game Pass Ultimate deal by picking up an Xbox Live Gold subscription from Walmart. The same deal applies here, so you can pick up three months and get another three for absolutely nothing. The kicker here is that Live Gold is considerably cheaper than Game Pass Ultimate - just $24.99. That, and this nifty little Xbox hack, means you can get a much better Game Pass Ultimate deal if you're new. This can only be done by those new to Ultimate, so unfortunately if you're just looking to top up your months, you won't be able to take advantage.

Xbox is currently running a promotion in which first-time users can try Game Pass Ultimate for just $1 - the punch line is that when this is activated on an account that has Xbox Live Gold months already stored up, those months are automatically converted to the premium service. Make sure you've activated your Live Gold months before you sign up for the $1 trial and once you do, you'll watch all those cheap months you paid for magically turn into a glorious Game Pass Ultimate subscription. This way, you're essentially picking up six months of Game Pass Ultimate for $24.99 - just $4 a month.

The trick is fully endorsed by Xbox, who are encouraging their punters to take advantage of the deal for as long as possible, though you'll only be able to stack 36 months at a time.

Six months Xbox Live Gold | $24.99 at Walmart
This buy one get one free on three month Xbox Live Gold cards doubles up as a great Xbox Game Pass Ultimate deal if you've not tried the service before. That's thanks to the handy trick in which Xbox automatically converts all pre-existing Live Gold months on an account into Ultimate months when the $1 trial begins.
View Deal

Looking for more? We've got all the best Xbox Live Gold prices around, and a collection of great Xbox Game Pass subscription sales from across the web.