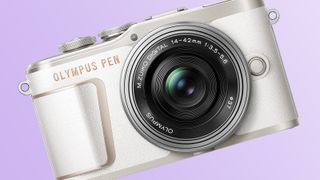 Olympus has confirmed that its new entry-level mirrorless camera, the E-PL10, is now available to buy in the UK, though its price and lack of upgrades mean its discounted E-PL9 predecessor looks to be the better budget buy.

The Olympus PEN E-PL10 is a beginner-friendly Micro Four Thirds camera with the same core features as the Olympus PEN E-PL9, which means it has a 16MP sensor, 8.6fps burst shooting and the ability to shoot 4K video at 30fps. As before, there's also 3.5 stops of in-body image stabilization, which is helpful for both shooting video and preserving image quality in lower light.

So what's new? Not much, apart from a new Fine Tune option for its popular Art Filters, which lets you adjust the levels of those filters if they're either too strong or too weak for your taste. The PEN E-PL10 also brings a new black colour option (replacing the black-and-silver E-PL9 option) to sit alongside the standard brown and white versions.

Whether these new features are enough to justify the E-PL10's pricing is debatable – you can buy it now exclusively from Olympus' online store for £550 (body only) or with the M.Zuiko Digital ED 14-42mm F3.5-5.6 EZ kit lens for £650. No worldwide pricing is is yet available. The E-PL9, meanwhile is now available for £350 (body only) or £485 with the same kit lens, and will remain on sale alongside the E-PL10.

The previous PEN is mightier

When we reviewed the Olympus PEN E-PL9, which is the near-identical predecessor the E-PL10, we said it was "perfect for first-time buyers who’ve outgrown a smartphone and just want a camera that reliably captures sharp, well-exposed images, fits in a bag and doesn’t look like a piece of military hardware." While there have been compelling new options since it launched in March 2018, such as the Nikon D3500 for DSLR fans and the Panasonic GX9, it remains one of the better budget options for beginners looking to upgrade from their smartphone, particularly at its discounted price.

Olympus E-PL9 body | £358.97
The latest PEN model from Olympus packs 4K video, built-in image stabilization and compatibility with an endless assortment of compact Micro Four Thirds lenses – and you can now get your hands on one for just £358.97.
View Deal

The main reason for the E-PL9's affordable price tag is the lack of a built-in viewfinder, which you can find on Olympus more expensive OM-D cameras like the E-M10 Mark III.

But if you don't need that EVF and are looking for an advanced point-and-shoot camera with a huge range of lenses, then the PEN E-PL9 offers very good value, particularly when compared to its new, pricier E-PL10 sibling.