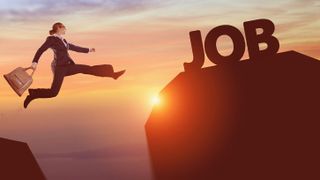 Got some good news to share with us about your moves? Send the details to desire.athow@futurenet.com with a photo if possible.

Industry veteran Chris Millington has been appointed to oversee Emporia's expansion into the UK market in 2020. Millington will assume the role of UK & Ireland MD at the company.

Gavin Patterson has joined Purple WiFi as a non-executive director. Patterson left his role as BT CEO in January and has since assumed the position of EMEA Chairman for Salesforce

Risto Siilasmaa will step down as the chair of the Nokia board at the company's AGM in April. Siilasmaa joined the Nokia board in 2008 and was interim CEO between 2013 and 2014. He will be replaced by Sari Baldauf.

After two years as CEO of Data Select, Fergal Donovan has joined PCS Wireless as European President. During his time at Data Select, Donovan built relationships with leading manufacturers to strengthen the company's position in the UK.  In his role with, Donovan will look to grow PCS Wireless at a time of growth in the refurbished device market.

Mark Mitchison has replaced Nazish Dossa as managing director of Brightstar UK. Mitchinsoon, who has previously held positions at Samsung, Carphone Warehouse and Huawei, most was most recently a professional coach and founder of Wellbeing Executives.

Ofcom has appointed Jonathan Oxley as interim Chief Executive. Oxley, who is currently Group Director for Competition and Board member for Ofcom, replaces Sharon White who is departing for John Lewis. A full time successor will be named after the General Election.

Tom Deynard is the new CEO of MVNO Tesco Mobile. He was previously COO of Tesco's store in Malaysia, having joined the retail giant in 20125. He replaces Claire Lorians who remains with the company as Group Innovation Director.

Vodafone has appointed its current Rest of World CEO Vivek Badrinath as the cEO of its new European tower business. No successor to Badrinath will be sought as Vodafone is abolishing the Rest of World regional organisation and integrating it elsewhere in the company.

Former BT CEO Gavin Patterson has joined the board of AI and analytics firm Fractal. Patterson, who departed BT in January, has also recently been appointed as Salesforce EMEA Chairman.

Max Taylor has rejoined Vodafone as consumer director. Taylor had previously spent a decade at EE where he was most recently Managing Director, Marketing.

Jeff Dodds has been named as Virgin Media chief operating officer. Dodds replaces Lutz Schuler who will takeover as CEO in June.

Wilkin Lee has joined Oppo as Business Development Director for the UK. Lee joins from Xiaomi having previously spent six years at Honor.

Qualcomm CFO George Davis has left Intel to take up the same role at rival Intel.  Davis joined Qualcomm in 1997 and held his most recent role since 2013.

BTGS gets first Director of Media and Technology

BTGS has named Roger Woodend as its first Director of Media and Technology. Woodend has been at BT for 15 years and will head up the newly-established global team from New York City.

Simon Holden has been appointed to a newly created position of Group Chief Operating Officer at CityFibre, reporting directly to CEO Greg Mesch. Holden joins from Holdman Sachs, where he spent 18 years in London and New York.

Steve Heald has been named as the new Managing Director of A1 Comms' businessn division. Heald joins from O2 where he was head of B2B direct partners.

Mark Gilmour is the new Head of Mobile Connectivity Solutions at Colt Technology Services. Most recently he was Senior Advisor for Product Line Management Cellular and Wireless at Ciena.

Nokia has named Sandra Motley as President of its Fixed Networks Business Group. Motley replaces Federico Guillén who is the new Nokia President of Customer Operations and joined the company as part of the Alcatel-Lucent merger in 2016.

Charles Davies is the new MD for Hyperoptic’s ISP business. Davies will work to build the Hyperoptic brand and will report to CEO Dana Tobak.

Orange CEO Stephane Richard has been named the new Chair of the GSMA. He will be responsible for overseeing strategic direction that the mobile industry body.

BT Security CEO Mark Hughes is leaving his position to take on a "senior" role at another company, reports the FT. Hughes had spent 16 years at BT and will now oversee a transition period.

BT has confirmed Worldpay joint-CEO Philip Jansen will become its new chief executive next year, ending the search for a successor to current boss Gavin Patterson.

Mobile phone case manufacturer Tech21 has named its former marketing director and head of sales Colin Woodward as its new CEO. Woodward has 20 years experience in the technology industry having previously served at HTC and Sony

Hanif’s new remit will be to ensure Ofcom’s work is informed by the latest developments in network technology, having previously served as head of convergence at BT-EE.

Fibre to the Premise (FTTP) network builder Hyperoptic has appointed Boris Dragovic has been appointed as Chief Strategy and Transformation Officer. Dragovic will be responsible for helping the altnet scale and operate more efficiently as it gears up for expansion

Three CTO Bryn Jones has left the company after six years, believing the time is right for a career and lifestyle change.

Jones joined Three in May 2012 and was responsible for network strategy, design and deployment. Prior to that he was Director of Mobile Delivery at Virgin Media.

EE's MD of marketing Max Taylor has left company to take on a new position elsewhere. Pete Oliver has taken on the newly combined role of Marketing for BT Consumer, EE and Plusnet. Taylor had been at EE for 15 years

Wilkin Lee has left his role as Honor UK sales and marketing director after nearly four years with the Huawei-owned smartphone maker. It is unclear where his next position will be, but Lee did say on Twitter that there were “exciting challenges” in the pipeline.

Gigaclear COO Mike Surrey has been promoted to CEO following the departure of Matthew Hare. Hare, who founded the alternative network infrastructure builder, had been a champion for ultrafast broadband during his eight year tenure.

Uber has appointed the former MD of Virgin Mobile as its new head of Northern and Eastern Europe. He was previously director of electronics at Amazon UK and replaces Jo Bertram who left last year. His biggest task will be dealing with Transport for London (TfL) about renewing his licence.

Helmut Reisinger has been promoted to CEO of Orange Business Services, replacing Thierry Bonhomme, who will retire later this year. Reisinger was previously head of international, covering the firm's business outside France, and will report directly to Orange CEO Stephane Richard.

Andrew Cantle is the new chief commercial officer at mobile advertising firm Unlockd. Cantle was previously head of EMEA and APAC at GoCanvas and before that he was Australia and UK country manager at Tranglo Mobile Payments. At Unlockd, he will be tasked with growing the firm and obtaining new supply partners.

EE's head of media and broadcast Matt Stagg is to take up the newly created role of BT Sport Director of Mobile Strategy. Mobile is an increasingly important platform for the broadcaster and Stagg will be tasked with growing the audience and helping identify new technologies.

Gerry McQuade will be the first chief executive of the new BT Enterprise division when it launches on 1 October. McQuade is currently CEO of BT Wholesale and Ventures, which is to be combined with BT Business and Public Sector, whose own CEO Graeme Sutherland is to depart the company.

Exertis has appointed Paul Jacobs to the newly created position of Director of business development and innovation, where he will be responsible for bringing new and emerging technologies that can add value to resellers. He was previously Business Unit Director at Tech Data UK.

Huawei has named Anson Zhang as the new UK managing director for its consumer business. Zhang joined the company as its Finland MD in 2009 before taking up similar positions in Poland and the Czech Republic.

Ericsson appoints Xavier Dedullen (pictured) as it chief legal officer and head of legal affairs of compliance. He was previously Group General Counsel and Chief Compliance Officer at Swiss-based firm LafargeHolcim. Ericsson has also appointed its CTO Erik Ekudden to its executive team.

Jo Bertram has been named O2's new digital and strategy officer, reporting directly to CEO Mark evans reports the FT. Bertram was head of Uber's northern European business but left last October. Since then she has been an executive in residence at tech fund EQT Ventures, a position she will retain once she joins O2 in April.

Andrew Taylor will take over the reins as CEO of Gamma Communications in May following the retirement of long-serving incumbent Bob Falconer. Taylor was previously CEO of Nomad Digital, which was acquired by Alstom in 2017, and before that was at Digicel where he oversaw the firm’s fixed and mobile networks in the Northern Caribbean

BT has hired Michael Sherman to fill the newly-created role of Chief Strategy and Transformation Officer, reporting to CEO Gavin Patterson. Sherman joins from the Boston Consulting Group where he spent 11 years heading its Technology, Media and Telecommunications (TMT) group in the US.

Acer has appointed a new country manager for the UK, with Craig Booth promoted from within to replace Preben Fjeld who became Lenovo’s General Manager for UK and Ireland last November.

Micron has appointed Raj Talluri as Senior Vice President and General Manager of Mobile Business Unit. He will be responsible for leading and growing Micron’s mobile business. This includes building mobile solutions to address the growing market opportunity driven by new usage models.