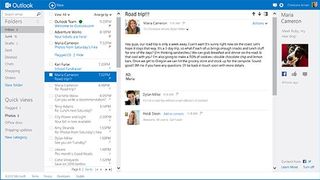 Another inbox to nurture

So long Hotmail, we hardly knew ye – Microsoft has ditched the Hotmail brand and ported its webmail service over to Outlook.com.

Outlook.com, which has launched in preview form, brings elements of Microsoft's Windows Metro design to your email and aims to fight spam and irrelevant greymail right out of your inbox.

At first glance, it seems to do this by requiring you to puzzle out a number of infuriatingly hard to decipher captchas but we're sure it'll calm down after you verify your account and use it on a regular basis.

As your account becomes more advanced, it will begin sorting your emails into known contacts, newsletters, notifications and so on.

And you'll need that organisation, given that Outlook.com is "the first email service that is connected to Facebook, Twitter, LinkedIn, Google, and soon, Skype, to bring relevant context and communications to your email".

So alongside your emails, you'll see friends' photos and status updates as well as being able to video call and chat from the inbox.

"While Gmail and other webmail services like Hotmail have added some features since then, not much has fundamentally changed in webmail over the last 8 years," blogged Microsoft's Chris Jones, introducing Outlook.com.

"We think the time is right to reimagine email."

You can go to Hotmail and 'upgrade' your existing email address or sign up for a brand new one at Outlook.com – it's compatible with mail apps on Android, iOS, BlackBerry and Windows Phone.

It seems to be going rather well for Microsoft so far, with its official Outlook Twitter account tweeting that it had hit 1 million sign-ups in the first six hours after the announcement. But can it maintain that momentum?

Check out the video of the "reimagined" webmail service below and let us know what you think over on Twitter.