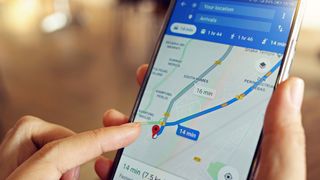 Google Maps is a near-essential app for getting from place to place, and millions of users rely on it every day. The app continues to gain new options, and now it seems that Google is working on a feature that will make it safer for people travelling at night.

Night-time travel can be nerve-wracking, particularly if you are on foot. If you in a familiar place, you probably know the best streets to get you from A to B, but if you're in a new town, walking on dark street can be unsettling. A teardown of the Google Maps v10.31.0 beta shows that the Android version of the app could soon get a new map layer that with indicate streets with good lighting.

Details of the discovery were shared by XDA Developers, and while it's not known when the feature will launch (or even that it definitely will), a glimpse at the app's source code reveals numerous tantalizing references to the as-yet unseen Lighting layer.

Step into the light

The code refers to a "safety layer" labelled Lighting, and explanatory notes that says the layer will enables users to "See how brightly lit the streets are".  Additional strings of code read: "Yellow lines show streets with good lighting", "Poor to no lighting" and " No lighting info available".

It's impossible to tell not only if the feature is certain to see the light of day, but also whether it will see a global release rather than being limited to a few countries. If and when it does appear, though, it's something that's sure to be well-received by dog-walkers, runners and cyclists.