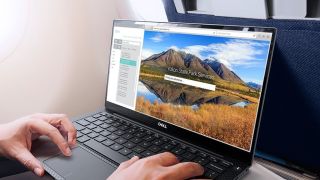 Ahead of CES 2020 next week, Dell has released new details on its updated Dell XPS 13 Developer Edition which will ship with Ubuntu 18.04.

The latest edition of Dell's popular laptop for developers includes the company's first-ever four sided InfinityEdge display which will feature a 16:10 aspect ratio as opposed to the 16:9 display found on the previous generation. The new Dell XPS 13 Developer Edition can even be outfitted with a 4K 3840 X 2400 touchscreen panel with HDR 400.

One new addition that will likely be welcomed by developers is the inclusion of fingerprint-reader support that will make it easier for secure authentication. However, this feature won't be available at launch but will be rolled out shortly after via an OTA update.

In terms of specs, the 2020 version of the Dell XPS 13 Developer Edition will include the latest 10th Gen Intel Core 10nm CPU with up to 2TB of SSD storage and 32GB of RAM. According to Dell, the new laptop will also have Wi-FI performance that is three times faster than the previous generation thanks to the Killer Wi-Fi 6 AX1650 module.

Dell has continued to provide the latest specifications in its Developer Edition machines as part of its Project Sputnik initiative which was launched eight years ago with the release of its first developer-focused systems.

The company has continued to release multiple Linux-based laptops and it now offers 150 Linux-based computers. Other mainstream PC manufacturers only ship Windows-based devices which is why Dell's XPS 13 Developer Edition has remained a popular choice among developers and IT professionals over the years.

The latest XPS 13 Developer Edition will be released at the beginning of February and the device will have a starting price tag of $1,119 for the Core i5 model with 8GB of RAM and a 256GB SSD.

However, if you'd prefer to pick up the latest model of the regular Dell XPS 13, it will be available in January starting at $999. The reason the Developer Edition is priced a bit higher is because Dell offers better baseline specs for its developer-focused systems than it does for its consumer-focused machines.