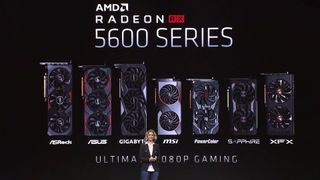 We’ve previously observed that the GPU wars seem to be heating up at the start of 2020, and AMD is reportedly boosting the clocks of the RX 5600 XT ahead of its imminent release, as a counter-attack against Nvidia’s recent price drop of the RTX 2060, which would seem to indicate that the battle lines are being well and truly drawn.

Following news that Nvidia had dropped the price of the RTX 2060 down to $299 (and £275 in the UK), around a 15% cut, we theorized that AMD might need to look at adjusting the price of the Radeon RX 5600 XT – which is about to come out on January 21 – because otherwise it looks a shaky value proposition compared to the 2060.

Remember that the 5600 XT was aimed to take out the GeForce GTX 1660 Ti, but with that RTX 2060 price cut, the AMD card is hardly much cheaper than the 2060 (and maybe not cheaper at all if GPU makers offer discounts on the latter, as EVGA did when it launched a new model recently).

However, according to a report from Videocardz, AMD’s response isn’t to drop pricing, but rather to pep up the performance of the RX 5600 XT just before its launch.

How will this be achieved? AMD has allegedly released a new BIOS to GPU makers, allowing for the increase of the TBP (Total Board Power) from 150W to 160W, meaning that it’s possible to ramp up the clock speeds of the 5600 XT, gaining substantially better performance.

So Sapphire’s RX 5600 XT Pulse graphics card is now clocked at 1,615MHz (game clock) and 1,750MHz (boost clock) according to the manufacturer’s site, whereas previously the card was revealed with 1,560MHz and 1,620MHz clocks respectively, to give you an idea of the jump here.

What’s also really interesting is that the memory clock is now listed as 14Gbps, and again that has been increased from 12Gbps. All other core specs remain the same, incidentally.

Guru 3D further reports ‘significant changes’ to the 5600 XT’s firmware, which are designed to benefit OC (overclocked) models of the RX 5600 XT, like the aforementioned Sapphire product.

As both Nvidia and AMD readjust the cards in the middle of their line-ups, of course there are other ramifications, and as we’ve previously mentioned in the case of the RTX 2060 price reduction, it brings into question the pricing and relative value of the top-end GTX Turing products like the 1660 Ti.

AMD’s alleged boosting of the power of the RX 5600 XT raises a similar question in terms of whether this might put the incoming GPU too close to the performance of the RX 5700 for comfort.

Certainly there are some arguing that this could be the case, although there are counterarguments, naturally. The RX 5700 does offer 8GB of video RAM, and has a fatter 256-bit memory bus, compared to 6GB and 192-bit for the 5600 XT.

Naturally the exact pricing of the new 5600 XT boards will also be a vital consideration, in terms of exactly where manufacturers like Sapphire might pitch the asking price of their higher-end overclocked models.