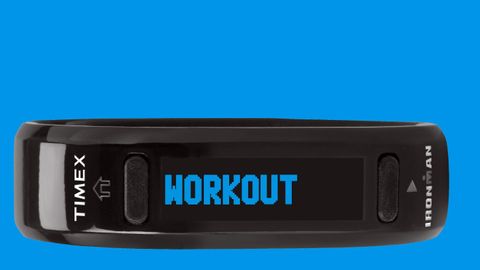 The latest band on the run

An excellent screen, good battery life and solid step counting don't really add up to a purchase worth £100 when you take into account the lack of a motivational eco-system around the Timex Ironman Move x20

I've been working my way through an armful of fitness trackers since Christmas, from the Withings Ox to the Garmin Vivsmart and a few others that shall remain nameless, and a theme has emerged. That theme involves dodgy step counting, dodgier calories-burned counting, terrifying heart beat fluctuations and sleep analysis that plays fast and loose with the word "analysis". I've also encountered companion apps that look ugly and do little, as well as apps that look lovely and do even less.

I've found all this a little annoying at times, as a runner used to more in-depth analysis; I'd probably have been properly narked if I'd had to part with £100 per go. However, after chatting with my editors we've tended to come to the conclusion that being ruthlessly detailed with the data isn't the what these bangles are all about. There are tools to monitor serious exercise plans, from the TomTom Cardio range to the Garmin Forerunners. These, by contrast, are more to encourage anyone, regardless of age, girth or fitness, to get moving a bit more. If the graph is going up, you're okay.

It was in this frame of mind that I approached the testing of this next tracker, the Timex Ironman Move x20, which promised to count my steps, track other exercise too, and also give me smartwatch-style alerts, all for under £100/$150 - and somewhat less than that if you shop around.

Due to the fact that a recent illness and operation had floored me, I now needed a kick up the arse/ass to start getting active again. I'd not only had to stop my marathon training, I'd had to stop moving altogether. After a couple of weeks laid up, daily steps at zero, and more than a few pounds gained, it was time to strap on a motivating bangle. Over to you, Ironman.

The first thing to note about the Timex Ironman Move x20 is that it looks quite like the Garmin VivoFit and the Huawei Talkband B1 and quite a few other fitness trackers. In fact if you Googled "generic fitness band", an image very much like this might appear.

As with most of these trackers it's relatively easy to work out what needs to be done as soon as you open the box, which contains just the band itself, a (very) short USB charging cable and a neat little instruction booklet.

The charger is rather odd - attaching it is a little like fastening another fitness band to your fitness band, and also quite fiddly. The battery indicator is then displayed on the screen… which is, of course, now half covered up by the strap of the charger. It's no great hardship, but it doesn't make you think, "Wow, these guys know about design." As seems to be the generic norm, it was already charged to 50 per cent in the box, which gave me, as it turned out, an hour to get a handle on the app before it reached full juice. But I'll come back to that later.

It was disappointing to put the Timex Ironman Move x20 on and find it really quite uncomfortable. Half the strap is rubbery, but the other half is a hard screen with a shiny, plastic finish, and it fits neatly around your wrist only if your wrist is the exact size and shape of the screen. Mine wasn't, so it didn't feel pleasant. Like the Huawei Talkband B1, it was "almost painful", being sat slightly on a bone at an awkward angle. The Garmin VivoSmart and Fitbit Charge HR are far better designed in this regard.

The up side to this is that the screen is clear and a decent size and easily visible indoors and out – it's notably more vibrant than the Garmin Vivosmart, although not as high-res and eye-searingly bright as the Fitbit Charge HR's screen (although that device's display is a lot smaller, so it needs both those attributes).

Often with these bands, the screen extinguishes itself mere seconds after you cease pressing buttons (there's no touchscreen here, unlike the Garmin Vivosmart). However the Timex Ironman Move x20 stays illuminated for around five seconds, which seems like the perfect amount.

Despite that, and the necessity for Bluetooth to make use of this band's alert function, battery life is not bad at all – I got about six to seven days of use out of it per charge.

The band is billed as having resistance to splashing (the Withings Ox also has this level of water resistance). These things really need to be pool-proof by now, especially when the brand, Ironman, suggests extreme, triathlon-type activity, i.e. swimming.