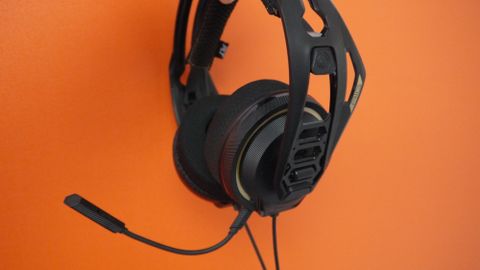 The Plantronics RIG 400 might not include the wireless or noise-cancelling features of its more expensive siblings, but it’s a headset that sounds good for the price, and includes a decent quality microphone. Unfortunately though, its open-back design means that the headphones are frequently picked up by the microphone.

If this generation has been visually defined by the emergence of 4K, then the audio equivalent has to be object-based audio, most predominantly with Dolby’s own Atmos technology, and the Plantronics RIG 400 is billed as the easiest way of getting in on this sound revolution.

For the uninitiated, Dolby Atmos essentially offers a three-dimensional surround sound system. Rather than sound simply coming from around and behind you, Atmos allows audio to come from above you as well.

The new technology has started to make its way into the world of cinema, but it’s also making its way into the world of games as well via the Xbox One family of machines as well as PCs running Windows 10. The $49.99 (£44.99 / AU$68) RIG 400 headset can work with the PS4, but you’ll want to use it with a Microsoft console to get the benefit of Atmos.

We’ll get into how the Atmos support actually works in just a moment, but first let’s look at what you’re physically getting with the RIG 400 gaming headset.

We’d be inclined to call the RIG 400 one of the most comfortable headsets we’ve ever used. It’s the budget sibling of the RIG lineup, which means no wireless operation or noise-cancellation, but this also has the advantage of making it fantastically light. We wouldn’t say it feels like you’re wearing nothing at all , but it certainly comes close.

The soft fabric ear cushions sit over your ears without touching them at all and the headphones are open-backed, meaning that air can pass easily through the ear-cups to keep your ears cool.

While we’re naturally big fans of cool ears, this does unfortunately also mean

The headset's microphone arm can be detached if you want to get some single-player gaming done without it getting in the way.

that the headphones are very leaky when it comes to sound. If you want a headset that you can wear to block out the outside world then the RIG 400 is not it, but if you play games in a quiet house then it’s less of a problem.

This is a wired headset, and by default Plantronics uses a combination mic / headphone jack to transmit audio. This is a jack that’s compatible with most phones, the PS4 and the Xbox One. If you want to use it with a PC, Plantronics supplies a Y-splitter so you can plug it into separate microphone and headphone jacks.

We spent most of our time with the headset playing on PC, and we grew to become very frustrated with this splitter, which doesn’t obviously label its microphone and headphone sides. We plugged the cables in the wrong way round more times then we’d care to admit, and we’d be surprised if you didn’t do the same. It’s not the biggest inconvenience, but clearer labelling would have been a big help here.

Since Dolby Atmos is forming a key part of the RIG 400’s marketing push, it’s worth taking some time to explain exactly how this functionality works. It’s not an exclusive feature to this brand of headsets, but Plantronics does simplify the process for you.

On PC, the license is inputted into the Xbox app. It’s then attached to your Xbox account, and it then applies across your PC and any Xbox One consoles that you use the same profile on.

Where it gets complicated is that this license only applies to games purchased through Microsoft’s own store. There are other games available through services such as Steam and Battle.net that support Atmos on PC, but which you don’t need this license key to access. Boot up Overwatch with your current pair of headphones and you can turn on Atmos with no problem.

It’s a complicated situation, and Plantronics has done a good job to simplify it as much as it can. The important thing to realise, however, is that if you like your current headset and want to upgrade to Atmos, then there’s no need to buy new hardware. You just need to buy the Dolby Atmos license from the Microsoft store.

Once you get over the Atmos confusion, the headphones sound great, and the microphone works well with people we played with reporting that our voice sounded nice and clear.

All the sounds you’d expect from a match of PlayerUnknown’s Battlegrounds were clear and distinct, from the sound of footsteps of enemies creeping overhead, to the crack of gunshots in the distance.

Although detail was good, we were impressed most of all with how spacious the sound was, which really benefits a game like PUBG where spacial awareness is at its most important.

This headset can even do a decent job of playing music. Their ‘gamer’ styling and leaky acoustic design means we wouldn’t want to use them in the outside world much, but the option is there for those that want it.

When playing music you realise that the bass response of these headphones doesn’t quite have the kick of a more expensive pair, but since this headset sits at the budget end of the spectrum we’re inclined to forgive this omission, particularly when the alternative in so many cases seems to be to introduce an overwhelming amount of bass.

Our single biggest issue with the headset is that the amount of sound leakage is such that the microphone frequently picks up the output of the headphones. Although you don’t notice it yourself while using them, other people talking to you will be able to hear themselves.

It’s a really unfortunate problem, and one that seriously undermines the headset as a communications device, even if the quality of both the headphones and the microphone are individual very respectable, especially at this price.

If you’re just looking for a pair of headphones to play single-player games with, particularly on Xbox One or Windows 10, then the Plantronics RIG 400 has a lot going for it.

Audio quality is decent at this price point, fit is very comfortable, and the soundstage is lovely and wide. The inclusion of a Dolby Atmos license is a great addition for anyone looking to try out the technology on those games that support it, even if you’re able to buy it separately for your current headset.

But the unfortunate feedback problems between the headphones and the microphone mean that we’re not able to recommend the headset for use in multiplayer gaming where you’re going to be talking to others. It’s simply too annoying for your teammates to be able to hear themselves constantly fed back through the headset’s microphone.

It’s a shame, but at this price point you’re able to get headsets that don’t suffer from this problem.