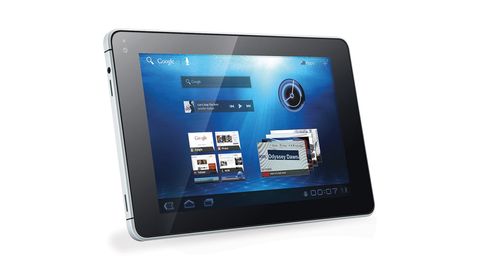 Huge in China, here in the UK Huawei is a name you might be tempted to pronounce 'who are we'. But it's a brand the company is determined to stamp on Western consciousnesses over the coming months.

It slunk into the low-end smartphone market with a series of Android phones a couple of years back, and in November of last year branched out with a noisy press party for the 7-inch MediaPad 7.

We've only just been able to get hold of a review device, so if this is a launch it's not exactly rushing, but the MediaPad 7 has been worth waiting for.

We're very much tempted to call this 'the iPad done right'. Even Apple co-founder Steve Wozniak has confessed that he personally prefers Android's flexible openness to Apple's tightly closed and controlled iOS. And when it comes to form factor, we've always thought the iPad was too big and too heavy, and with version 3 it's even become a little heavier.

One of our first portable phones was the Motorola Brick. It weighed 790g and was carried around in an enormous black leather bag along with a Sinclair Z88 and a whole bunch of papers. Since then, the definition of portability has changed.

However, many of us at PC Plus argue that if a thing needs a bag, it's not portable. In particular, should we consider the iPad to be portable? And what exactly is its function? They're flying off the shelves, but are defining a product category that's completely separate from regular work tools like phones, notebooks and desktops.

The conventional wisdom seems to be that it's a couch-potato toy, best suited for web browsing, photo viewing and movie watching. But how successful is the iPad and other tablets at achieving this?

The key problem is the 10-inch form factor insisted upon by Steve Jobs. It makes for a large device too heavy to hold in the hand for any length of time. So you put it on the table or rest it on your lap. In that mode if you want to do any data entry you would be much better off using one of the new breed of Ultrabooks.

Seven-inch tablets are a much better fit for the human hand. Huawei's new MediaPad 7, unlike the iPad, is so small that you can comfortably stick it in your inside jacket pocket, making it a fully portable no-brainer. It's less than half the weight of that Motorola Brick and around a third lighter than the newest iPad.

Can you do real work with it? You certainly can. Mostly by tapping and sliding on one of the many Android virtual keyboards available. It's also entirely feasible to mix in short bursts of dictation, which uses servers in the cloud to do the speech-to-text translation.

On rare occasions when a physical keyboard is needed it's easy enough to pair the tablet to a decent Bluetooth keyboard such as the ZAGkeys Flex.

Huawei makes much of this being the first Android 3.2 Honeycomb tablet, but that's not much of a big deal now that Android 4.0, aka Ice Cream Sandwich (ICS) has landed. In fact there's nothing about the MediaPad 7 that's a big deal. And that, for us, is the big deal.

It's a well designed, more-or-less generic Android tablet, of excellent build quality, available with or without HSPA+, that will do everything you'd expect from this class of device. The aluminium body has a solid, creak-free feel and we particularly like the way access to the SIM and SD cards is concealed behind one of a pair of triangular black panels.

The two tiny speakers on the top edge in portrait mode create a surprisingly convincing stereo soundscape at close range, although they'd be more useful for movie-watching on opposite edges in landscape orientation.

The pre-installed software is sparse. Aside from the mandatory mission-critical Angry Birds, the only standout is Huawei Office, a Microsoft compatible spreadsheet, word processing and presentation package. But Android Market (recently renamed Google Play) is there to fill in with everything you might need.

We grabbed Google Docs right away (the newest version is a revelation) along with the Go Keyboard, and the indispensible TuneIn Radio.

Admittedly, tablets aren't quite there yet as a full-blown work tool, but the Huawei MediaPad 7 takes a big step forward towards convincing us this is the form factor of the future. If it has a challenger it would be the easier to hold and even smaller - but no less capable and considerably more costly - 5.3-inch Samsung Galaxy Note.