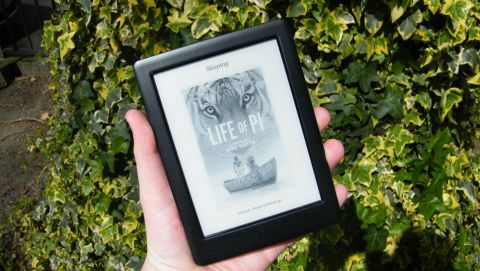 The Kobo Glo HD is all about value and a great reading experience. It's easily as good as any Kindle. As well as a slightly more practical though boring design, it's also much cheaper than the high-end Kindle Voyage.

The Kobo Glo HD is better than the Kindle Voyage. Firstly, it has more pixels. Its six-inch screen boasts an unbeatable 300 ppi. Secondly, its lightweight design makes it the easiest ereader yet to hold in one hand. Thirdly, its integration with read-later web app Pocket makes this an ereader that's about far more than just books.

With an RRP of UK £109.99/US$129/AUS$179.99, it's also cheaper than the Kindle Voyage. Amazon won't be worried about Kobo Glo HD because of its dominant market position, but those after the most versatile and best value ereader yet should take note.

Physically speaking, the Kobo Glo HD is travel nirvana. It weighs an almost pathetic 180g, and its 157 x 11 5 x 9.2mm shape fits in almost any pocket (jeans pockets, a suit jacket inside pocket, and even a top shirt pocket). It's easy to hold in one hand, too, thanks to both its lightweight design and a perforated silicon backside that offers just a little friction. That makes the Kobo Glo HD easier to hold than both a slippery smartphone and, yup, the Kindle Voyage, though that mottled rear is slightly harder to keep clean.

The ins and outs are simple, too. There's a micro USB slot on the bottom for both transferring files from a laptop or computer, and for charging. Using this slot, files can be transferred via a computer to the reader's built-in 4GB brains, but there's no expandable storage. That's unusual on a Kobo product. Wi-Fi is provided for syncing and for downloading titles from the Kobo Bookstore.

This is an ereader designed to be used and abused. Though there's nothing mentioned on the packaging, the rubberised rear, and raised bezel around the screen fashioned from black plastic, has 'drop me' written all over it. However, it's not waterproof like the Kobo Aura H2O.

This no-nonsense approach to product design continues with a ComfortLight that's always on. Unlike the Kindle Voyage it does't react to ambient light levels. It's a purely a manual process to tweak the brightness levels.

There's little to like about the design from an aesthetic point of view. It's plain, it's practical, so great for kids and travellers. As a slab of industrial design it won't win any prizes, but it's practical enough to be used on the go, and by kids.

As well as an online bookstore that's weaved in to the user interface, all Kobo readers have integration with Pocket. Fans of reading reviews and long-form articles on the web can open a Pocket account, integrate it into a browser (or use the custom Pocket email address) and everything saved will we visible on the Kobo Glo HD.