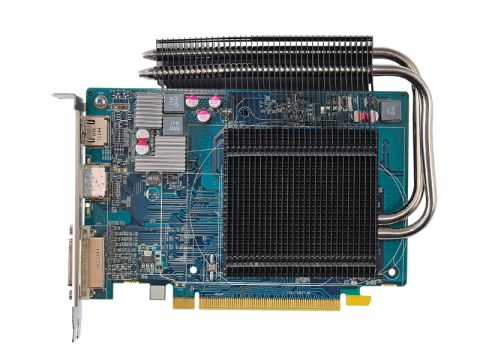 An improvement over Sapphire's previous generation, but not by a huge amount

As the name might suggest, this Sapphire HD 6670 Ultimate is the direct replacement for the HD 5670 Ultimate. The Sapphire Ultimate graphics card again comes passively cooled and is only a little more expensive than its older brother.

So it's essentially more of the same then? Almost. This updated GPU comes with the AMD Radeon HD 6670, plus 80 extra shaders, a smattering of extra texture units and a small hike in core clock speeds. Other than that, it really is pretty much business as usual between the HD 5670 and the HD 6670.

All that GPU tweakery means you do get some extra performance out of this newer card, though admittedly not much. At most you're looking at 3fps faster across our benchmarking suite, though that can sometimes make the difference between choppy and playable gaming.

That will ring especially true once you knock some of the advanced graphics settings down a notch or two, especially the resource hog that is anti-aliasing.

Again you're looking at fairly playable frame rates in modern games at lower settings, and good performance in older titles such as Far Cry 2 on Max settings.

That does all come at a price, though, and we're not just talking about the money you're paying for this newer card over the old one.

The Turks GPU at the heart of the HD 6670 is clocked faster, with more transistors and a larger die size, and as such draws a good chunk more power than the HD 5670. That doesn't mean it requires anything over and above what the PCI-e bus can deliver in power terms, but this does mean the passive cooling heatsink strapped to the PCB is pushed to its absolute limit.

Under load we regularly recorded the GPU hitting the 100C ceiling, and that's absolutely no good for either the GPU silicon itself or the ambient temperature of whatever chassis you're hoping to drop this card into.

You can, of course, pick up the HD 6670 in vanilla trim with the basic reference active air-cooler, and that won't come with the crazy-high operating temperatures, but then you'll lose on the silence front.

There is one feather in the HD 6670's cap, though, and that involves its happy partnership with the new desktop AMD Llano platform in Hybrid CrossFire mode.

But if you're looking for a card to power the graphics of your system on its own then the difference between the HD 5670 and this HD 6670 is pretty minimal. The Sapphire HD 6670 Ultimate is an improvement over Sapphire's previous generation, but not by a particularly huge amount.

You're better off picking up one of the more serious contenders, such as the XFX HD 5770, which won't tax your wallet as much as you might think.