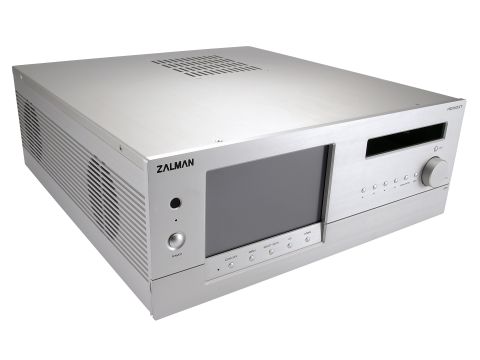 The main selling point of this chassis is the 15:9 ratio 7-inch LCD screen

Although it can provide great flexibility as the centrepiece of your digital entertainment, the PC is way behind standalone DVD players and stereos in terms of appearance and useability.

For a computer to warrant the title media centre PC, it needs to offer more than just software. HTPC (Home Theatre PC) cases add front panel controls and, in this case, a brushed aluminium exterior to blend with other consumer electronics. But Zalman goes one step further with the HD160XT.

The main selling point of this chassis is the 15:9 ratio 7-inch LCD screen. This is a plug-and-play monitor, powered by a standard Molex connector, which makes use of a VGA cable fed from the rear of the case and routed to your video output. This screen works like a normal monitor, the only difference being its fixed position in your chassis.

Reading text is not easy with a mere seven inches of desktop real estate, although increasing DPI and allowing font smoothing in Windows can help. This is not a big problem, since you'll find yourself using it for full-screen media centre applications more often than email or word processing tools; the HD160XT is meant for entertainment after all.

The front panel display benefits greatly from touchscreen functionality, which means it's perfectly possible to take a computer housed in the HD160XT, with no mouse, keyboard or external monitor, and interact with your media centre like normal. This has become the holy grail for HTPC designers, who want to embellish a PC with the simple one-touch functionality of a stereo or DVD player, a major barrier to the PC becoming essential for the living room.

The touchscreen works by attaching an internal USB connector to a spare port on your motherboard, then installing a driver and control application. Functionality is sadly restricted to users of Windows only. After running the calibration tool, the touch interface is precise enough to make controlling your system a breeze, with full-sized track information, graphic equalizers or any software you choose.

Aside from its LCD screen and touch controls, the HD160XT is a standard media centre case. It features a set of four exhaust fans - located near the CPU, hard drives and next to the PSU - that all connect to a single fan controller allowing their speed to be adjusted within Windows.

This is definitely a welcome feature, since they are so loud when running at full speed you wouldn't want the case anywhere near you while trying to watch a film. As well as the driver software, Zalman includes its own media centre program, MediaBay. Functionally this software offers all you need for basic media browsing and it is also fairly attractive with thumbnails, transparent frames and large TV friendly text.

You can fit an ATX board into the chassis, unlike some other Micro- ATX only HTPC cases. The price for this convenience is in the huge dimensions of the case - similar to a regular PC tower but horizontal. We would actually prefer the HD160XT to be Micro-ATX only, just to reduce its monstrous size a little.

The interior appears very spacious but full-length video cards could be a problem, thanks to the removable hard disk caddy being only an inch from the side of the motherboard. This is partly down to the additional electronics at the rear of the screen taking up extra space. You still may be able to squeeze a G80 into the case, although perhaps not the longest or thickest variants. It's also hard to see why Zalman couldn't have provided us with a tool free installation, this now being the standard feature of premium cases.

Is this the perfect HTPC case design? No. But the touch-sensitive screen is a useful addition. A PC built around the HD160XT truly could be used as a standalone device, without restricting you in any way. Take the screen away and you're left with an attractive but large aluminium desktop chassis, similar to other HTPC cases. There are additions such as the integrated fan controller and memory card reader but little else to make the chassis stand out.

Smaller does not imply cheaper in the case of LCD panels such as this. The HD160XT costs £200 more than other HTPC cases that lack embedded, touch-sensitive screens. Considering the premium being demanded for this chassis, you might expect Zalman to include a PSU or better quality remote control, but both of these are lacking.

The interactive display is definitely a gimmick. In no way is it necessary for a working media centre system. It's a shame Zalman didn't put quite as much love into the rest of the case design as they put into the integration of the screen, which would have made this an outstanding product.