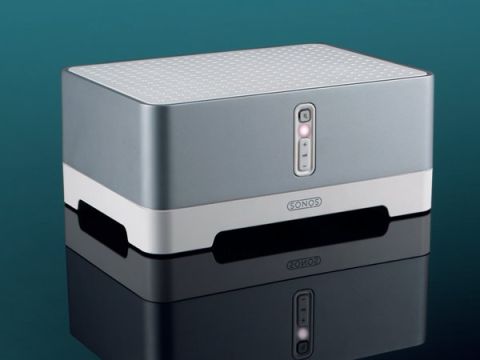 The concept of wirelessly streaming digital music around the home isn't a new one. We've noted the potential of the Slim Devices SqueezeBox, admired the design of the Roku Soundbridge, and admit to a having soft, almost gooey spot for Cambridge Audio's Azur 640H. But we've not missed any of these when we've had to send them back.

On the other hand, nothing does wireless music as simply or as elegantly as the new Sonos Digital Music System. I'm fighting the urge to go out and buy one right now.

The system itself consists of two main elements - the Zone Player (ZP100) and the Zone Controller (CR100). The Zone Player is where all the technical action is and it's this exquisitely designed grey/white box that forms the basis of any Sonos system.

A Zone Player is capable of wirelessly streaming music from a connected PC, Mac or Network Attached Storage (NAS) device. Hook up a pair of speakers or run the audio output into an amp and you've got yourself an instant Wi-Fi hi-fi.

But crucially, it also offers multi-room support that doesn't involve digging holes in your walls. Up to 32 Zone Players can be linked together wirelessly, enabling you to dispatch Gorillaz or Oasis to every room in the house.

One of the problems with cheap digital music adapters like the SqueezeBox is they often require a degree in 'geek' before the average person can set one up. But setting up the Sonos system is a breeze. You simply plug a Zone Player into your wireless router and install the Sonos Desktop Controller software on a PC or Mac. The software takes care of the rest, automatically tunnelling through your firewall (to provide Internet radio) and locating the Zone Player. Your part in this process is limited to clicking 'OK' a few times, showing the software where to find your music, and pressing two buttons on the Zone Player to bind it to the host computer.

But here's the clever bit. Unlike cheaper digital music adapters, which stream music over your existing 802.11b or .11g network, the Sonos system uses its own wireless mesh network (SonosNet) to link Zone Players together. Once connected, you access your music library via the Zone Controller, a weighty remote with a bright LCD panel and an iPod-inspired scroll-wheel.

Using the Zone Controller, you can quickly and easily search through the music library, sifting through your MP3, AAC, WMA, FLAC, Ogg Vorbis and WAV files using familiar categories like 'artist', 'album' or 'genre'. With one click, tracks can then be added to a song queue - basic shuffle and repeat modes spice up the playback.

An active queue can also be saved as a playlist, while a lazy-boy option enables you to import existing Windows Media Player and iTunes playlists. Unfortunately, DRM'd WMA and AAC tracks aren't Sonos-friendly. But as the system can be firmware upgraded, don't rule either out in the future.

For a ripped CD collection, the Sonos is technically perfect. Each Zone Player boasts its own digital amplifier, so the sound has a strong, rich feel, whether it's the uplifting piano riffs that tumble through Coldplay's Speed of Sound, or the deep, head-thrumming back-beat of Gorillaz and Kids With Guns. Of course, the sumptuousness of music playback is ultimately determined by the quality of the speakers you plug into the Zone Player, not to mention the encoding rate of your digital tracks.

On their own, a Zone Player/Zone Controller combo easily outclasses rival digital music adapters. But Sonos hasn't designed its kit to be a bog-standard point-to-point system. Adding extra Zone Players to the mesh network is no more difficult than the initial setup process and with multiple players you can stream different music to each player, or broadcast the same track across several players for a multi-room audio effect. Only then do you start to realize just how superb and how indispensable the Sonos is becoming.

Suffice it to say, the Sonos system is one of the greatest digital home gadgets since TiVo, blessed with an overriding Apple design ethic that puts user experience above all else - for example, there's a motion sensor built-in to the Sonos Controller, so it switches on when you pick it up. Yes, like the SqueezeBox and the SoundBridge, the Sonos is effectively an IT-based system. But you never need to see (or worry about) the complexity of the background tech. The Sonos just works.

So why am I still here? Why am I still fighting that urge to go out and buy one? To be honest, it's a question of cost. Simply Sonos (www.simplysonos.co.uk) sells a starter system, which consists of two Zone Players and a Controller, for £899.

Add to this the cost of a good NAS (the asking price for a 250GB Buffalo LinkStation is around £200) and you're shelling out over £1,000 for a hi-fi. Then again, this is a futuristic hi-fi that has the potential to change the way you listen to (and store) your music. The heart still says 'yes'; the head says 'oh, go on then'. It's the girlfriend who needs convincing.