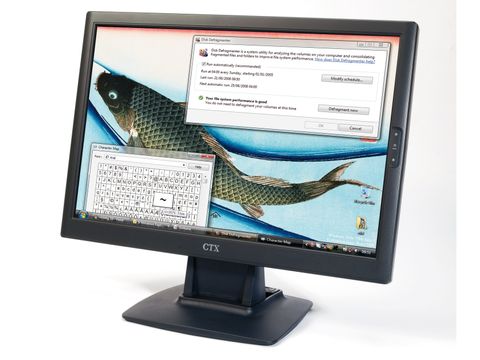 The X962A's looks hardly set it apart from its rivals

The price is the main attraction, but everything else suffers as a result

With 19in screens now firmly established as the size of choice for almost every type of PC user, there's a huge range of models to choose from. You can start in the bargain basement with its lacklustre inhabitants at around £130, and move on up to the likes of the excellent Sony X-Black screens and their ilk, which come in at £300 and over.

CTX is pitching its new X962A as a 'high specification display at a very competitive price point'. However, the price point itself, of around £165, puts it up against some pretty fierce and high-quality competition from the likes of Acer, BenQ, LG, Samsung and Sony, to name but a few.

Taking the CTX out of the box, the first thing you notice about the screen is the blandness of the styling, which includes a cheap looking silver paint job on the bezel and a plasticky charcoal base. Lack of frills include no swivel or height adjustments on the base and a very basic set of three switches, which are actually mounted on the back panel.

The switches themselves provide for power on/off, volume adjustment of the rather tinny built-in speakers, and access to the refreshingly intuitive and easy to use on-screen menu system, which can be used to control everything from autosetup to brightness, contrast and colour temperature settings.

In fairness, there are some impressive entries in the specification list, including a high 700:1 maximum contrast ratio and a fast 8ms response time. Elsewhere, the list looks a bit lacking, especially when it comes to video inputs, because the CTX merely features a D-Sub analog input and there are no DVI digital options. Viewing angles are also a little on the thin side, with 160 degrees both horizontally and vertically.

We had to turn our review sample down to less than 50 per cent for both brightness and contrast in order to stop highlights washing out, at which point the colour temperature went a little bluish, in spite of being on its 'warmer' setting. However we tried to adjust it, the CTX screen just wasn't accurate enough for image editing, and it barely scraped through for general viewing. It certainly wouldn't be our first choice for this amount of money. Matthew Richards