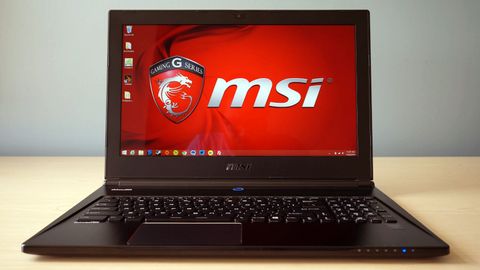 Thin, light and 3K are what this grand gaming laptop excels at, but save some dough and go for the 1080p version.

Gaming in resolutions far sharper than mere "HD" is something that gaming PCs have been able to dangle over consoles – even the PS4 and Xbox One – for some time. Now, chip makers, like Nvidia, and hardware manufacturers, in this case MSI, have bestowed that power to gaming laptop fans.

MSI helped start the trend with the hulking GT60 Dominator 3K, and recently brought the tech to a respectable size with the MSI GS60 Ghost Pro 3K. Taking the company's recently established and well-received Ghost design and slapping a 2,880 x 1,620 IPS display on it, this machine achieves both form and function.

Even better, the Ghost Pro 3K has dashing good looks going for it, too. With a lid encased in deep gray, brushed aluminum adorned by an illuminating MSI Dragon Army logo, the laptop rides a fine line between subtle cool and unabashed gamer appeal. The same material covers the notebook' keyboard deck, but doesn't enclose the entire machine.

If you wanted a unibody design, look to the Razer Blade. The Ghost Pro 3K is out to save you a few bucks while still maintain a bit of cool factor. That said, the base of the unit is a black plastic with plenty of vents and small, downward-facing speakers that produce loud, but overall thin audio. As with most gaming laptops, bring a pair of headphones.

That being the case, what you see above the SteelSeries, island-style keyboard replete with numeric keypad are intake vents for two large cooling fans underneath. Just above that is a fantastically shiny, glowing power button and a rather thick plastic bezel wrapping around the 15.6-inch WQHD+ panel.

Despite some conceits to cut costs both for MSI and the consumer, the Ghost Pro 3K achieves a premium look and feel throughout. If it weren't for the bold, red dragon logo that lights up and effectively screams "gamer over here," I wouldn't think twice about pulling this machine out at the airport or on a train.

Even when you're not gaming – and more on that in a bit – the WQHD+ panel on the Ghost Pro 3K makes everything else look absolutely gorgeous. Of course, Windows 8.1 must be magnified by at least 150% to compensate for the plethora of pixels, but text and images nevertheless look stunning.

The viewing angles on this display are incredibly wide, as you should expect from any IPS screen. That makes this gaming laptop ideal for couch co-op play, though at that point you're likely to just hook it up to an HDTV anyway.

At any rate, rest assured that the only diminishing return on a screen this sharp is the included price. It's important to consider whether such a pixel-dense panel is even necessary, especially when gaming at said resolution. But before we get into that, let's see what MSI managed to produce for the price.