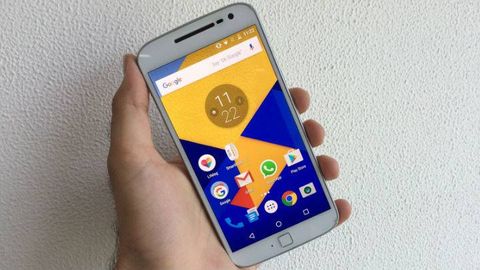 At a starting price of Rs 13,499, the Moto G4 Plus is a compelling buy. It performs well, runs on stock android and has a superb display and fingerprint sensor. However, the mediocre battery life, the underwhelming camera and the all plastic build let it down.

The Moto G4 Plus is one of two variants of Motorola's fourth generation Moto G, the firm's bestselling smartphone range ever. This is the first time Motorola (now owned by Lenovo) has launched more than one smartphone in the G range, with the Moto G4 and the Moto G4 Plus.

In comparison to the regular Moto G4, the Moto G4 Plus features an improved 16MP rear camera with phase auto detection, laser autofocus and a dual LED Flash. It also comes with a fingerprint sensor.

Does the Moto G4 Plus have what it takes to continue the success of the Moto G line? Does it do enough to earn the 'Plus' moniker? Let's find out in our official review.

The Moto G4 Plus features a removable plastic back, an all glass front and a silver finish around the sides (also made of plastic).

The body is unashamedly plastic, and the removable back is quite flimsy and bends rather easily. The phone does feel good in the hand, although the back creaks and flexes quite a bit. The smartphone doesn't feel anywhere near as premium as the One Plus X or even the far cheaper LeEco Le 1s Eco.

However, being a plastic device, the Moto G4 feels extremely durable and able to withstand a few bumps and knocks. In fact, during my testing, the smartphone fell straight to the floor from the pocket of my jeans and survived, with just a few bumps and bruises.

The Moto G4 Plus features a fingerprint scanner on the front, although the square bezel housing the sensor does not act as a home button. Motorola has opted for capacitive buttons for home, back and recent apps. This feels rather unnatural and takes some time getting used to, as out of habit, I kept hitting the fingerprint scanner in order to go home. However, it is great to see how fingerprint sensors, from being a luxury on flagships a year ago, are slowly becoming a mainstay, even at the budget price point.

In a departure from previous Moto G generations, which were always a bit chunky and thick, the Moto G4 Plus is rather thin at just 7.7 mm and weighs a reasonable 154 grams.

The device has a microUSB 2.0 port on the bottom, the headphone jack on top, power and volume keys on the left, the 13MP rear camera along with the dual LED flash and secondary noise cancelling microphone on the rear, with the fingerprint sensor, primary microphone, 5MP front camera, light and proximity sensors and the earpiece on the front.

The power and volume keys are a little too soft and mushy for my taste, and their positioning is a bit off, as the thumb naturally lands on the volume down key instead of the power key. Thankfully, the power key is textured to help distinguish it from the volume keys just by feel.

The single external speaker unit is adequately loud, but sounds tinny and shrill at full volume. The earpiece is more than adequate though and calls made through the phone could be heard loud and clear.

The lack of USB Type C can be seen as both a negative as well as a positive. On one hand, USB Type C would have made the phone future proof. But on the other hand, it has not still not achieved widespread acceptance and the number of devices featuring USB Type C are still extremely low. With microUSB, you will never be in a situation where you run out of charge and your friends don't have the cable you need.

The Moto G4 Plus features a 5.5-inch full HD (1920x1080 pixels) display, with a pixel density of 401ppi. This is the first time a Moto G smartphone has come with a full HD display. The three previous generations had to make do with only a 720p panel. The display is also covered with Gorilla Glass 3 for protection.

To put it bluntly, the display is fantastic. While in the day and age of QHD displays, a 1080p resolution panel may sound disappointing, but in real life, it is rather impressive, with vivid colors, good viewing angles and great brightness levels

Outdoor legibility is decent, although the blacks are not as deep as I would have liked. For the price, the Moto G4 plus packs in a very capable display, that should not give users cause to complain.

The Moto G4 Plus is powered by a 1.5GHz octa-core Snapdragon 617 processor paired with a 550 MHz Adreno 405 GPU and either 2GB RAM + 16GB internal storage or 3GB RAM + 32GB internal storage. The internal memory can be expanded up to 200GB through a microSD card.

The smartphone has a 3,000mAh battery unit with TurboCharging support that as per Motorola delivers 6 hours of usage with just 15 minutes of charging.

The Moto G4 Plus is more than capable of handling daily tasks, and handles casual use such as web browsing, scrolling through photos and lists, taking pictures etc. without any major lag or stutters.

The inclusion of the Snapdragon 617 is a major improvement over the Snapdragon 400 series found in the previous three generations, helping the phone accomplish day to day tasks without any hassle.

Create column charts
Games like Subway Surfers, Traffic Rider and Temple Run run smoothly,  without any lag or hiccups. However, graphic intensive games like  Asphalt 8: Airborne and Real racing 3 do suffer from frame rate drops  and choppiness. However, on reducing the graphic quality level, they run  without any hitch.

Thankfully, the phone doesn't suffer from heating issues, which is a  refreshing change of pace. The fingerprint sensor is also a delight to  use, and is very snappy and accurate, However, as mentioned before, the  odd choice of not integrating the home button into the fingerprint  sensor does take some times getting used to.

We tested the 3GB RAM variant and the smartphone did not suffer from  memory management issues, and handled multi-tasking relatively well. The  device did not bog down even with a multitude of chrome tabs and  applications open in the background.

The camera is also very fast, with next to no lag in focusing and processing photos.

Overall, the Moto G4 Plus is a genuine improvement over its successor in terms of overall performance. The Snapdragon 617 CPU and Adreno 405 GPU combo is able to handle casual to moderate use without any issues, and is good for gaming as well.

The Moto G4 Plus continues Motorola's tradition of an almost 100% stock Android experience. Apart from a few Motorola applications and gestures, the phone runs on a stock build of Android 6.0.1 Marshmallow.

It is ironic that Lenovo, which now owns Motorola has such a cluttered and customized skin in its own Android devices, while the Moto products have stock android out of the box.

Motorola, like HTC has also removed some of its duplicate apps, leaving only Google's offerings on the smartphone such as Photos, Play Music etc. This is a welcome move, and helps reduce clutter and confusion.

Motorola includes gestures like shake to activate the torch and twist to launch the camera, which work near flawlessly. In addition, Motorola also includes its 'glance' view, which shows you the time and any notifications when you wave your hand over the screen.

While in most smartphones, gestures are usually reduced to just gimmicks, in the G4 Plus, they are surprisingly usable.

The inclusion of stock Android is also a big contributor to the snappy performance of the device, with no heavily customized skin bogging it down.

On the connectivity front, the Moto G4 Plus supports 4G LTE, 3G, 2G, Wi-Fi, Bluetooth 4.0 and GPS. It also comes with dualSIM support. What is missing though is NFC, which means the fingerprint scanner cannot be used for Android Pay. While this may not be an issue for most, I find it a letdown considering how NFC is no longer a niche and is becoming more and more common.

The Moto G4 Plus features a 16MP auto-focus rear camera with laser auto focus and phase auto detection along with a 5MP wide-angle front camera for selfies. Motorola claims the Moto G4 Plus is excellent in low-light and bright-light scenarios, touting a higher DxOMark result than the iPhone 6 and iPhone 6S Plus.

While the camera does produce decent results, it doesn't come close to the benchmark set by Motorola's tall claims. Motorola, in general has always struggled with their smartphone's cameras, with even the flagship Moto X packing in a mediocre camera setup. Since the Moto X Style last year, Motorola has been on a mission to improve its imaging credentials.

On the Moto G4 plus, they succeed, somewhat. In well-lit situations, the results are not bad at all, quite sharp, with good color saturation and acceptable detail. Though some noise does creep in. However, as has been with all previous Moto smartphones, low light situations are its Achilles heel. It's not as if the images are a dark and muddy affair, however, they lack detailing, have lots of noise and lack sharpness.

All is not bad though, Indoor shots with adequate light turn out surprisingly decent and the phone handles Macro shots really well, producing crisp and vibrant results. As mentioned before, the camera performance is extremely snappy, with little or no lag in focusing and processing. The laser auto focus does a really good job, focusing on objects instantaneously, and never leaving you waiting.

The rear camera can shoot 1080p videos and the results are mediocre. The lack of OIS and 4K recording is a big letdown. The front camera is good enough for the occasional social media selfie, and is more than adequate.

Here are some camera samples -

The Moto G4 Plus is powered by a 3,000mAh battery unit with TurboCharging support that as per Motorola, delivers 6 hours of usage with just 15 minutes of charging.

The battery life of the smartphone is mediocre at best, and quite bad at worst. With light to moderate use, the smartphone makes it to the end of the day, but just barely, with just 5-6 percent battery left. Any intense usage scenario like using GPS or gaming will find you looking for a charger in the middle of the day.

On a positive note, the TurboCharging works flawlessly, charging the phone all the way to hundred percent in little over an hour. Moreover, charging the smartphone for 15-20 minutes in the middle of the day gives it enough juice to comfortably last the day.

The Moto G4 Plus has a fantastic display, snappy fingerprint sensor, stock android, good performance and is very slim.

The camera, while not bad, doesn't live up to Motorola's lofty claims, the battery life is mediocre and the plasticky build is big let down.

At a starting price of Rs 13,499, the Moto G4 Plus is a compelling buy, and continues the G series of smartphone's tradition of providing good smartphones at an affordable price. It has a superb display, fast and accurate fingerprint sensor, stock android and performs admirably well.

However, with the market flooded with smartphones having full metal bodies and stellar build quality, the all plastic construction of the Moto G4 doesn't inspire much confidence. In addition, the mediocre battery life and the underwhelming camera stop it from achieving excellence.