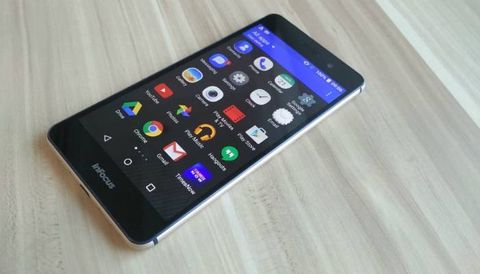 Other than its design and display, nothing is really appealing

Infocus is around for a while and has its presence in budget and mid-range smartphone market. Recently the U.S based technology firm announced that it was tying up with Foxconn to produce smartphones and TVs in India and has plans to become a $1 billion company by 2016.

Having said that, the company has launched its premium smartphone series that features a metallic design and decent hardware. Let's find out what the least priced M808i has to offer.

At first glance, Infocus M808i looks like a replica of Apple's iPhone 6. The round edges, speaker grilles at the bottom edge and the SIM card slots are few design elements that are taken exactly from the iPhone6. So, this makes M808i one of the best designed smartphones in the Rs 12,000-15,000 price bracket.

Though the M8080i looks sturdy for its aluminum grade metal, but at the same time, it is slippery too.

The Infocus M8080i sports 5.2 inch 1080p screen with three on-screen controls. It is fitted with a 5MP fixed focus camera and sensors. The rear of the smartphone looks subtle. The black antenna bands run through the top and bottom and the camera, which comes with dual-tone LED flash, sits on a black rubberized base and looks a bit unwanted on the aluminum back.

Infocus has pushed the power button of M8080i to the left edge, just above the volume rockers, which is quite difficult to reach when you are operating the smartphone with one hand. Moreover, the buttons are too streamlined with the edges and they fail to offer a good tactile response. We ended up pressing them multiple times to get the job done. Infocus should have placed the power button above the SIM and microSD card slots on the right edge to make the design more ergonomic.

Infocus M808i is the first device in the company's premium metallic range and has a decent spec sheet. The smartphone is powered by an octa-core 64-bit MediaTek MT6753 processor, clocked at 1.3GHz and is supported by 2GB of RAM.

Talking about connectivity, Infocus M808i offers Wi-Fi, 4G/3G, dual nano SIM, GPS and Bluetooth. As of now, M808i is available in 16GB storage option but it's not a problem as the memory is expandable to 128GB via microSD card.

A full HD display has become a standard thing for Chinese brands and same goes for Infocus M808i. The 5.2-inch display is fully HD and is fairly responsive. The colours are neither too warm nor too cold. The display of the smartphone is also very bright, which makes it easy to use outdoors too.

Infocus M808i has Android 5.1 Lollipop with company's customized layer running over it, which is disappointing. The UI is snappy during basic home screen navigation and loading of applications but the frequent app crashes hamper the overall experience.

Besides, other applications such as Appy Geek, Times Now, in-built task manager and WhatsApp crashed quite often. It seems the UI is just not optimized for the applications. An upgrade from the company might resolve the issue but for now, the UI is buggy that makes the Infocus M8080i look like an unfinished product.

However, other stock applications such as calendar, clock, voice recorder, etc. are nicely designed with minimal interface. The Notes application with its extensive set of tools is one of the best we have used in a while.

Meanwhile, Infocus M8080i gives you liberty to choose your own type of UI layout (with or without app drawer) which is not there in other Chinese smartphones.

Here's the twist. Infocus M808i packs decent hardware but its buggy UI makes it lose the game when compared with its closest rivals such as Moto G and Xiaomi Mi4i. The quad-core CPU on Moto G (2015) manages to deliver a better overall performance than the octa-core Soc of M808i in day-to-day tasks. It's not that M808i is an incapable device, it can easily run all applications but a balance between the hardware and software seems missing.

The point gets clearer from the graph below as M808i performs quite well in the benchmarks we tested.

Moreover, with the MediaTek MT6753 inside, Infocus M808i has serious heating issues. The smartphone heats up extensively during WhatsApp calling (on Wi-Fi) or if you play graphics-intensive games for 15 minutes or above. We had to pause the game so that the smartphone could come back to its normal temperature. We did not encounter such issues with Moto G (2015), which completely takes the cake because of its stock Android UI. Xiaomi Mi4i also sails through all such tasks without any performance issues.

Just like a full HD display, a 13MP primary camera has also become a standard feature at the moment for Chinese brands. However, it's a well known fact that the megapixels alone do not account for a good camera performance.

That said; the 13MP rear shooter on M808i fails to match the likes of Xiaomi Mi4i and Samsung Galaxy j5. The images taken from the rear camera lack sharpness and there's a blue color hue to all the pictures. Meanwhile, images taken from the 5MP front camera are also average. The camera does not include the manual mode, which is quite common these days in smartphones priced under Rs 12,000.

So, if camera is your priority then Infocus M808i is not the best bet in this price bracket.

Considering the 5.2 inch display with a full HD resolution and an octa-core CPU, we were expecting at least a 3,000mAh battery unit. However, Infocus M808i ships with 2450mAh battery that is just an average performer.

The smartphone struggled to last for a day on one-time full charge with moderate usage. The battery dropped significantly while playing games or during WhatsApp voice call on Wi-Fi.

Xiaomi Mi4i and Moto G deliver better battery backup than Infocus M808i on similar usage patterns. We also tried to run the battery benchmark but the test did not run, so we played a full HD video with Wi-Fi turned on and 50% brightness. Infocus M808i touched a mark of 6 hours 47 minutes, which is not the best in this price bracket.

The design is premium and display is bright and crisp.

The design is premium and display is bright and crisp.

We have some really good smartphones like Moto G (2015), Xiaomi Mi4i, Samsung Galaxy J5 and Asus Zenfone 2, in sub Rs 15,000 price bracket. These smartphones have a good performance graph and thus pose a great challenge to Infocus M808i. In terms of design and display, M808i takes the cake, however other performance aspects do not match the competition.