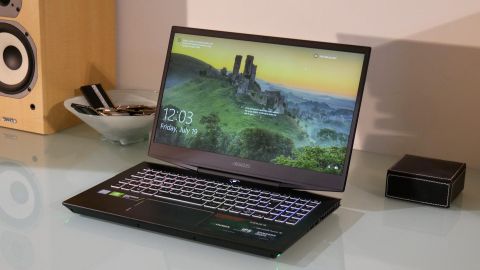 Here's how the Gigabyte Aorus 15-SA 2019 performed in our suite of benchmark tests:

First a little candour. This isn’t the most powerful gaming laptop on the market. In fact, Nvidia offers fully three GPUs in ascending order that are more powerful than the Gigabyte’s GTX 1660 Ti 3D chip.

Likewise, the 1660 Ti isn’t quick enough to simply crank the settings to max in any game and get buttery-smooth frame rates in every game. But then, that much was pretty much a given. What we can confirm is that you’ll get very playable frame rates in nearly all games with the settings maxed out.

The 55fps it achieves in Total War: Warhammer II at ultra settings and 72fps it cranks out in Middle Earth: Shadow of War, again set to ultra, are indicative of that. Games where super-high frame rates are critical tend to be a little less graphically demanding in any case. But compromise on just a few visual bells and whistles and the Auros 15 will seriously fly.

It’s worth noting, however, that when the Aorus is burning through a game’s 3D engine at a rate of knots, the fans spool up pretty dramatically. We had no issues with thermal throttling, but the downside is a lot of fan noise.

As for the rest of the rig’s performance, you couldn’t really have any complaints. The Intel six-core CPU offers a level of multi-threading performance that would have been staggering just a few years ago. The same goes for the 512GB NVMe SSD. Truly, this is desktop-class performance in a reasonably portable package.

As an example of the impact of cost savings, the Aorus does not appear to support Nvidia’s Optimus tech, so can’t switch to the Intel CPU’s integrated graphics to save power. Whatever, you’re looking at about three hours of video playback off the mains.

For the record, the 15.6-inch screen is a bit of a zinger. Supplied by LG, it’s bright and punchy with strong colors, good viewing and decent response. Factor in the 144Hz refresh and few gamers will have any complaints.

Inevitably, the Aorus’ battery life is less than stellar. Not only is this a performance orientated machine. It’s also competitively priced and reasonably compact, all of which tends to limit the size of the battery.

In our battery benchmark test, where we loop a 1080p video with the screen at 50% brightness, the Aorus lasted just three hours before needing to be plugged in. This is a laptop that you'll need to use near a plug socket.

Proper gaming laptops don’t come cheap. If that’s a well proven universal truth, the Gigabyte Aorus 15-SA is about as close as you’ll get to an exception. It boasts pretty much the perfect specification mix to keep the price in check while delivering a full-on gaming experience.

Likewise, costs have been limited in areas like chassis materials without compromising robustness too much. The system’s cooling gets the job done, too, albeit with a fairly hefty associated din.

The Gigabyte Aorus 15-SA isn't perfect, but it does deliver on its remits pretty effectively. If you can live with the limitations, including fairly poor battery life.